The distinction between peptides that bind to class II MHC products under laboratory conditions and those that do so physiologically is important for the prediction of antigens recognized by autoreactive T cells. In this issue of the JCI, Suri et al., using antigen-presenting cells, compared the peptides that bound to human HLA-DQ8 and those that bound to mouse I-Ag7, both class II MHC products that predispose their carriers to type 1 diabetes. The rules of engagement for the peptide ligands of the DQ8 and I-Ag7 molecules involve similarities in their anchor residues, which mediate stable interaction with class II MHC products. The peptides identified derive from overlapping sets of self proteins. 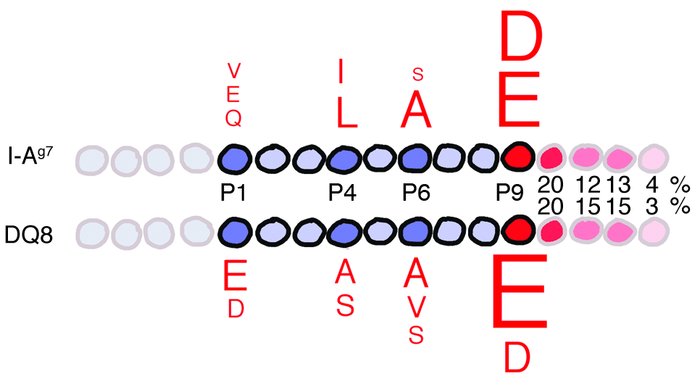 Peptide ligands for the class II MHC products I-Ag7 (mouse) and HLA-DQ8 (human). The central core of the peptide ligand is indicated in bold colors; anchor residues are shown in dark blue (at P1, P4, P6) and red (at P9). The amino acid residues preferred at the key anchor positions are indicated in single letter code, with the size of the letter proportional to the frequency of its occurrence. At P9, acidic residues (glutamic acid [E] and aspartic acid [D]) are universally preferred and account for greater than 90% of the amino acid residues found at that position. C-terminal of P9, acidic residues (aspartic acid, glutamic acid) are preferred as well. Their frequencies are shown as a percentage of the total number of peptides analyzed that carry an acidic residue at the indicated position. A, alanine; I, isoleucine; L, leucine; Q, glutamine; S, serine; V, valine.