Akt1 in the cardiovascular system: friend or foe?

Akt1 in the cardiovascular system: friend or foe?

Akt is an important signaling molecule that modulates many cellular processes such as cell growth, survival, and metabolism. Akt activation has been proposed as a potential strategy for increasing cardiomyocyte survival following ischemia. In mammalian cells, 3 distinct isoforms of Akt exist, but their precise roles in cardiovascular biology were previously unknown. Three separate studies published in this issue of the JCI now provide important new insight into the central role of Akt1 in the regulation of angiogenesis and the maladaptive or deleterious consequences of chronic unregulated Akt activation in the heart (see the related articles beginning on pages 2108, 2119, and 2128). Here we discuss the implications of these exciting new studies. 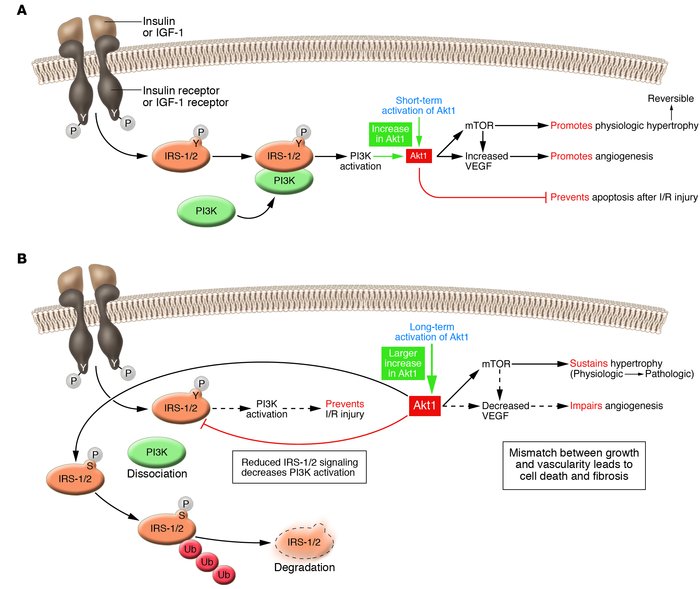 Effect of short-term or long-term Akt activation in cardiac muscle. () Short-term activation of Akt1 by physiological stimuli, such as insulin and IGF-1 signaling or exercise, promotes physiologic cardiac hypertrophy. Insulin and IGF-1 signaling is mediated in part via tyrosine phosphorylation (P) of IRS-1/2. Phosphorylated IRS-1/2 associates with and activates PI3K, which stimulates the generation of phosphoinositide-3,4,5 triphosphate and subsequently leads to the activation of Akt. Akt1 promotes physiologic hypertrophy via mTOR-mediated pathways. Short-term activation is associated with increased VEGF generation and release and may also protect against I/R injury. () Long-term, high-level Akt signaling is maladaptive. Downregulation of IRS-1/2 proteins occurs via mechanisms that involve increased proteasomal degradation. It is believed that increased serine phosphorylation of IRS-1/2 will promote this degradation. In addition, serine phosphorylation of IRS-1/2 limits its association with the insulin receptor, which further reduces the activation of PI3K. Reduced PI3K activation is associated with reduced recovery and increased tissue injury following I/R due to loss of PI3K-dependent but Akt-independent cardioprotective mechanisms. It is also possible that reduced IRS-1_mediated PI3K signaling may contribute to cardiac injury in patients with dilated cardiomyopathy. Long-term activation of Akt continues to promote cardiac hypertrophy. However, there is downregulation of VEGF expression, which leads to reduced angiogenesis. A mismatch between cardiomyocyte growth and blood vessel growth leads to cell death and fibrosis. Ub, ubiquitination.