The Proteus effect Stem cells and their promise for medicine 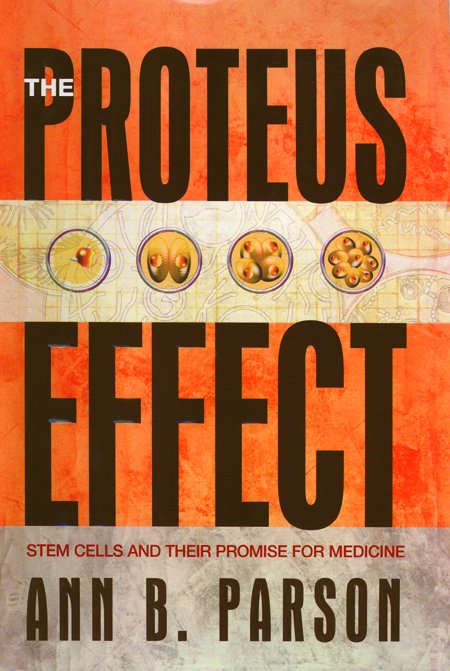 Ann B. Parson’s book The Proteus effect: stem cells and their promise for medicine, named for the mythical sea god who could change his shape at will, begins with an excellent introduction that describes what stem cells are and distinguishes the different types. A totipotential stem cell can produce all tissues, including the umbilical cord and placenta. Pluripotential stem cells are found in the inner wall of the blastocyst and can produce almost all tissues, while multipotent stem cells can produce several cell types, including the hematopoietic cells that can reconstitute the blood and immune systems. In the introduction, Parson attributes the following quote to biologist Evan Snyder: “even the dumbest stem cell is smarter than the smartest scientist.” I take issue with this statement, since although stem cells may do very complicated things, they do not have a mental process, and I hate to think that someone opposed to the use of embryonic stem cells for ideological reasons would pick up this phrase as supporting evidence that a zygote is equal to a human being.

In the first chapter, the author reviews observations made in 1740 regarding the regenerative capacity of the hydra — a freshwater organism, each part of which when severed from the rest is able to redevelop into a full animal. These were followed by similar observations in other animals such as the salamander. This regenerative power provides the underlying logic to cell-based therapies and paved the way, as Parson sees it, for more advanced experimental zoology and biological science.

The rest of the book gives a historical account of stem cell research. The text is mainly based on interviews with many of the scientists who have participated in the research rather than on analysis of seminal research papers, which makes the book a bit anecdotal. In fact, the cast of characters in this book is so large that it becomes difficult, and perhaps unnecessary, for the reader to retain all the information.

Parson goes on to relate the stories of the painstaking work of several scientists, including L. Stevens and Russell and Bernstein, all at the Jackson Laboratory in Maine, who used mouse strains with testicular teratoma, and later bone marrow transplantation, to cure radiation-induced anemia in rats — clearly the forerunner of cell-based therapy. She highlights the work of Thompson and Gearhart, who derived stem cell lines from human blastocysts and cultured primordial germ cells. Later, we learn how in vitro fertilization clinics flourished all over the world, in spite of the many accusations that scientists were playing God.

The debate regarding when a human embryo should be thought of and treated as a person is reviewed here, although it is not made sufficiently clear that this is more of a religious question than a scientific one. Parson discusses whether adult stem cells are equally as plastic as embryonic ones, which is important, because if the answer is affirmative, their use would be more agreeable in the face of ethical objections raised by conservative groups. Unfortunately this does not seem to be the case, although further research is warranted. Political and legislative issues surrounding stem cell research are explored as well. Parson states, correctly in my opinion, that most of the world is opposed to reproductive human cloning. But the topic of therapeutic cloning or the use of surplus in vitro–fertilized embryos to obtain stem cells is still a hot topic of debate. It should be clear that reproductive cloning would aim to produce human children, while therapeutic cloning only seeks to produce blastocysts to allow the harvesting of stem cells for use as therapeutic agents in a variety of diseases. In fact, it may be more appropriate to call this procedure nuclear transfer rather than therapeutic cloning because of the usual connotation of the word “cloning”.

It is interesting that Parson lists France, Germany, and Spain among the nations with large Roman Catholic populations opposing cloning for any purpose, which was the case at the time the book was written. However these 3 countries voted against banning all forms of human cloning in the 2005 General Assembly of the United Nations, which indicates the dynamics of this research area. Parson does not discuss the role of organized religion in the ethical debate regarding the use of stem cells in sufficient detail — in fact the word “religion” does not even appear in the book’s index.

The end of the book is concerned with research regarding stem cell–based therapy for disorders such as muscular dystrophy, autoimmune diseases, diabetes, deafness, depression, heart disease, and Parkinson and Alzheimer diseases, and the author treats all these with a cautious optimism, which is fine. The book contains a small but useful glossary, which is well written and easy to follow.

The Proteus effect gives an overview of the evolution of stem cell research and its application in providing cell-based therapies. It should be a useful book for anyone trying to gain insight into stem cell research as a whole, including its political and social ramifications.