The ancestor’s tale A pilgrimage to the dawn of evolution 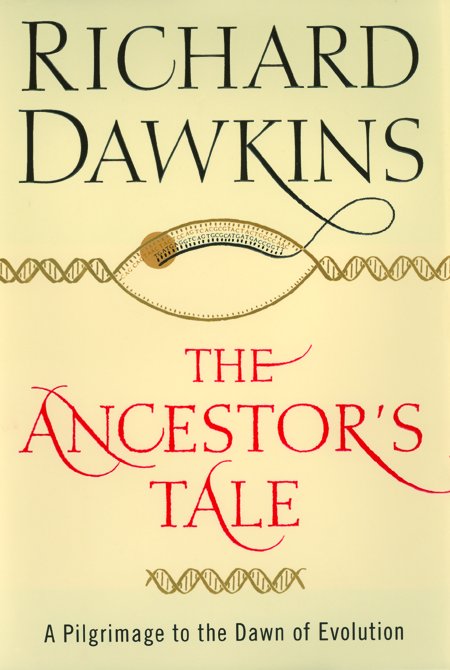 For a secular version of the greatest story ever told, it is hard to do better than the history of life on earth. The evolutionary diversification that spans 3 billion years, from life’s murky chemical beginnings to the extraordinarily diverse biosphere we have today, surely deserves an eloquent telling. But could one book possibly do justice to that tremendous time frame, to all the Darwinian complexities of the process, and to the great questions that come up as we include ourselves in that history? Yes indeed. Richard Dawkins’s The ancestor’s tale: a pilgrimage to the dawn of evolution is an extraordinary work that meets all of those challenges and many others.

If you have read some of Dawkins’s previous books, then you know he writes engagingly on evolutionary topics. With a highly self-assured style, he effortlessly draws insightful connections among disparate notions, trapping the curiosity of readers before they know what’s coming.

Rather than proceeding chronologically, Dawkins relates the history of life from a peculiar, though quite effective, backwards perspective. The author deliberately borrows from Chaucer’s Canterbury Tales and employs the device of a band of time travelers. At first the travelers include only the author and reader, but as we proceed back in time we meet up with the common ancestors of the human species and other groups of organisms. Thus, going back six million years, we arrive at the ancestral species that we share with the two species of chimpanzee. At this junction, as at most, Dawkins summarizes what is known about the ancestor’s time and what might be surmised about its form and lifestyle, based on molecular clocks, fossil evidence, and arguments from parsimony. Also, at each juncture, side trips to the present are taken to visit a particular extant species that serves the purpose of introducing an interesting evolutionary tale. Thus we have the tale of the axolotl, the giant salamander that exhibits an unusual mix of larval traits (aquatic life style, including gills) and adult traits (sexual maturity). More importantly, we learn about the evolution of paedomorphosis (i.e., retention of juvenile traits in the adult) in many other examples and are provided a discussion of the circumstances of and implications for species that have taken this path.

Another side trip Dawkins takes the reader on is the tale of the brine shrimp, which has evolved to swim on its back, upside down with respect to the way most crustacea swim. This tale, like many others in the book, focuses only partly on the main subject on the way to making a larger point about evolutionary processes. In this case, we also learn about the upside-down catfish, and Dawkins walks us through the probable scenario of how evolution could lead to such a major switch in lifestyle.

Given its travelogue aspect, one might suppose that the book is more about the actual history of life and less about evolutionary mechanisms than The selfish gene or Dawkins’s other previous books. But this turns out not to be the case at all. Yes, you will read some embryology and receive a good grounding in how evolutionary trees are constructed, and you will read more names of organisms and parts of organisms than you can remember, but the real lesson of this book — as always with Dawkins’s work — is about the way in which the process of natural selection led to the extraordinary adaptations that we find among different kinds of organisms.

One of the most interesting parts of the story emerges later in the book, as the reader becomes increasingly acquainted with cases of evolutionary convergence, where similar organismal traits have evolved multiple times. Having explored diversity and adaptation with myriad examples, Dawkins provides an exceptional discourse on evolutionary progress and inevitability. Do you wonder that something as complex and seemingly irreducible as an eye could evolve by Darwinian selection? In fact, eyes are an evolutionary no-brainer, so to speak, given a lot of time in a world bathed in sunlight. Eyes of various types, including many camera-like eyes such as our own, have evolved independently over 40 times. Another striking sensory adaptation is echolocation. In this case there are four independent cases (bats, toothed whales, oilbirds, and cave swiftlets) in which echolocation is known to have evolved.

A creative wordsmith and a master of Darwinian thinking, Dawkins writes in a style laden with genial arrogance. This aspect of his work is curious. Dawkins so clearly wants the reader to understand how evolution works, and yet he does not seem to see that a charismatic style might be counterproductive. Dawkins understands evolution exceptionally well, and he might pass that knowledge on to us better if we had just a little less of him.

An unfortunate editorial oversight is seen in the text’s occasional straying into political commentary. Worse still, Dawkins at one point chastises Richard Lewontin, the great population geneticist, for sometimes interjecting politics into scientific discourse. This little touch of hypocrisy is hard to miss if you read the entire volume. But such lapses amount to a few dozen words in a weighty, truly wonderful book.