Epithelial organs such as the intestine and skin have a relatively high rate of cell loss and thus require a reservoir of stem cells capable of both replacing the lost epithelia and maintaining the reservoir. Whether the kidney has such a stem cell niche has been a subject of great interest; the majority of data suggest that replacement of renal epithelial cells occurs via dedifferentiation and proliferation of existing tubular cells, while some studies demonstrate the presence of potential tubular stem cells in the renal interstitium. However, recent reports have suggested that the bone marrow may also be a source of stem cells for tubule turnover and/or repair. In this issue of the JCI, 2 groups explore the role of endogenous cells versus bone marrow–derived cells in mediating tubule repair. Duffield and colleagues demonstrate that bone marrow does contain cells capable of protecting the kidney from ischemic injury, but found that these cells do not act by direct incorporation into the repaired tubular segments. In contrast, Lin and coworkers found that some bone marrow–derived cells do appear to incorporate into the injured tubule as epithelial cells (see the related article beginning on page 1756). Importantly, both groups conclude that the majority of tubule repair occurs via proliferation of endogenous renal cells rather than incorporation of bone marrow–derived cells. 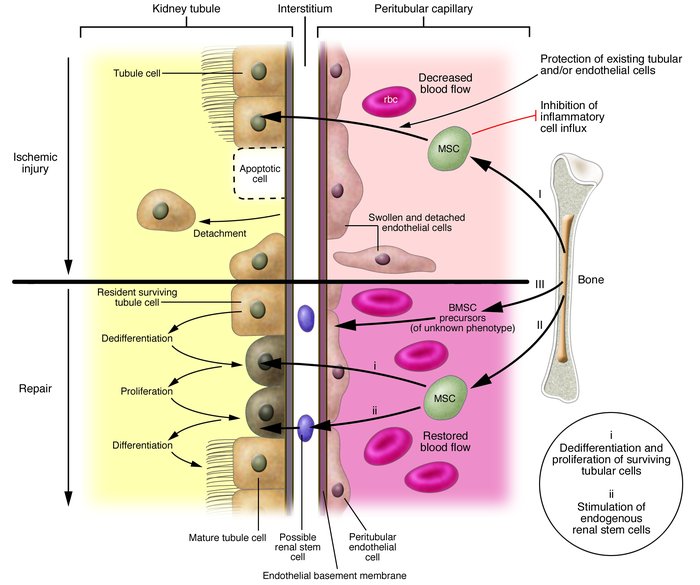 Potential roles of bone marrow–derived cells in renal protection/repair. After ischemic injury, the brush border of proximal tubular cells is rapidly lost, followed by either dedifferentiation and proliferation of these cells or cell detachment and death due to necrosis or apoptosis. The observation that the initial decline in renal function following ischemic injury is markedly diminished in animals receiving large numbers of MSCs suggests that these cells act to prevent the acute phase of the injury either by directly inhibiting cell death and/or by preventing inflammatory cell influx (I). Once injury has occurred, repair of the tubule requires the dedifferentiation, migration, and proliferation of the surviving tubular cells. In addition, it has been proposed that resident renal stem cells participate in the reparative phase by migrating into the tubule and differentiating into epithelial cells (). MSCs may direct this phase of tubule repair by secreting a factor (or factors) that promotes tubular cell dedifferentiation and proliferation or by stimulating the influx of resident stem cells (II). A second bone marrow cell type, possibly HSCs, appears to serve as a reservoir of endothelial progenitor cells, which potentially promotes endothelial repair and increases renal medullary blood flow (III). Finally, the possibility remains that bone marrow–derived cells can, very rarely, undergo differentiation into or fuse with existing tubular cells to directly participate in tubule repair. The infrequent occurrence of these last 2 processes suggests that they are not critical for functional recovery from acute ischemic renal injury.