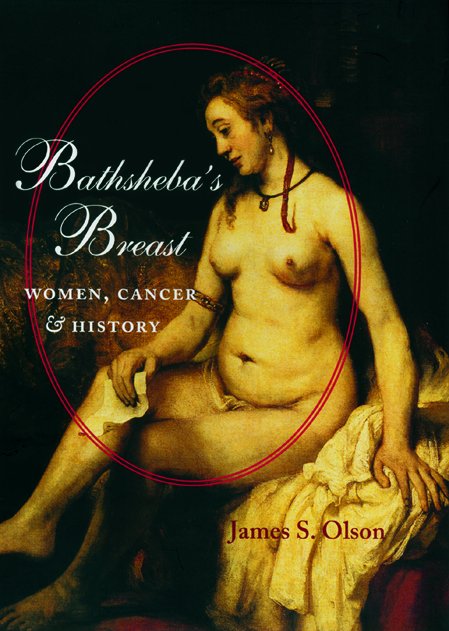 In 1654 Rembrandt painted a picture of his mistress entitled Bathsheba at her bath. Over 300 years later, an Italian physician vacationing in Amsterdam viewed the painting at the Rijksmuseum and noticed several characteristics of the left breast indicative of breast cancer. This observation underlies the title of James S. Olson’s Bathsheba’s breast: women, cancer & history, a retrospective of a disease across the centuries, immersed in the changes of society and interwoven with medical mystery.

Olson states his premise on the first page: “Breast cancer is an old disease. It transcends race, class, time, and space, a horror known to every culture in every age.” From here, the first half of the book outlines a who’s who of the (mostly male) physicians and purported healers who have attempted to define this disease and cure their innumerable female patients, including some of the most significant women in history. Through the stories of these women and their doctors, Olson’s characterization of breast cancer comes to life.

Olson traces the first descriptions of breast cancer back to the Egyptians in about 1500 BCE. In the fifth century BCE, Hippocrates led the quest to determine the scientific underpinnings of this disease, eventually attributing its cause to “black bile,” one of four theoretical fluids of the body known as humors. In the 1700s, these beliefs gave way to the more cell-based theories put forth by America’s first surgeon general, Benjamin Rush, who solidified the principle of tumor removal “by the knife” as the most appropriate treatment. Beginning with the advent of the Halsted radical mastectomy in the 1900s, Olson reports a steady advance in surgical and therapeutic interventions. He recounts horrific and yet page-turning descriptions of surgeries performed in the absence of antiseptic or anesthesia, superradical mastectomies removing whole sections of women’s bodies, and adrenalectomies, oophorectomies, and hypophysectomies executed in an effort to reduce the risk of recurrence. Radiotherapy and chemotherapy took hold in the 1930s and 1940s, spurred by chemical discoveries and a call for less mutilating cancer treatments. And the age of female “liberation” in the 1970s helped form current approaches to detection and treatment, including mammography, lumpectomy, and hormone therapy.

Entwined within this medical timeline are stories of women throughout history who have confronted this disease. Theodora, Empress of Byzantium, was strength personified when, after repeated excisions and cauterization, she refused a mastectomy and died of breast cancer in 548 AD. The queen mother of France, Anne of Austria, died of breast cancer in 1666 at the Val-de-Grace convent that she founded. In this sanctuary, she had cared for many nuns with the same disease. The story of Klara Hitler, Adolf Hitler’s mother, exemplifies the personal impact of breast cancer. Although Klara did not survive after her diagnosis and treatment in 1905, over 30 years later, the still-grateful Führer provided her physician, Edward Bloch, known to be Jewish, safe flight from Germany. Even to the present day, the list of celebrities and public figures who have survived or succumbed to breast cancer astounds. The experiences of Shirley Temple Black, Betty Ford, Nancy Reagan, Linda McCartney, and Jill Ireland show that we have not come as far as it may seem in our attempts to overcome this disease.

Olson, while accomplished in his use of detail, at times lends a heavy hand to topics that do not seem worthy of such attention. Lengthy descriptions of the female body as it pertains to breast augmentation and pornography may remind the reader that the text was written by a man. Olson also recounts the story line of a Danielle Steele novel about a heroine with breast cancer. While these topics are relevant to Olson’s commentary on society’s glorification of the breast in the 1970s, leading to the rise of the sexual revolution and a decline in the stigma of breast cancer, they detract from the book’s appeal.

In contrast, some topics worthy of more attention do not receive adequate focus. It is not until the book’s final pages that Olson introduces the topic of inheritance and familial breast cancer and the discovery of the breast cancer genes BRCA1 and BRCA2. It is pleasing to read this section after wondering if the genetic basis of breast cancer would be mentioned at all. However, in describing the impact of genes, Olson only outlines the basic risks of developing breast and ovarian cancer as determined in the earliest studies. And though Olson reviews the controversial option of prophylactic mastectomy, he fails to thoroughly express the devastating dilemma that faces women and their families in deciding whether or not to test and how to medically and emotionally manage being a BRCA carrier. An examination of how breast cancer has been treated over time outside of the US is also lacking.

Perhaps one of the more appealing aspects of this book, however, is Olsen’s passion for his subject. In a manner that is more than academic, he devotedly recounts the experiences of individuals who have faced this disease throughout history. This honesty and empathy make the book worthwhile for lay and professional readers alike and no doubt extends from his own experience in losing his left hand and forearm to sarcoma while writing this book. In this age, when almost every person knows a friend or loved one with the disease, has a mother, sister, or daughter who fears her annual mammogram, or serves as a physician administering therapy, this book can serve as a lesson to us all — that we cannot judge where we are going without respecting where we have been .