Anorexia is one of several abnormalities characterizing chronic kidney disease (CKD) that cause cachexia, the loss of muscle and adipose stores. It has been attributed to mechanisms ranging from accumulation of toxic “middle molecules” to psychological problems. In this issue of the JCI, Cheung and coworkers used elegant techniques to demonstrate that CKD-associated anorexia is caused by defective hypothalamic regulation of appetite. They attributed the defect to an alteration in the hypothalamus’s response to leptin and inflammation. Since similar hypothalamic defects suppress appetite in inflammatory states and in cancer, it is possible that anorexia in several cachexia-inducing conditions results from a common set of hypothalamic abnormalities. The development of small molecules capable of preventing these regulatory abnormalities holds the promise of eliminating the contribution of anorexia to the development of cachexia. 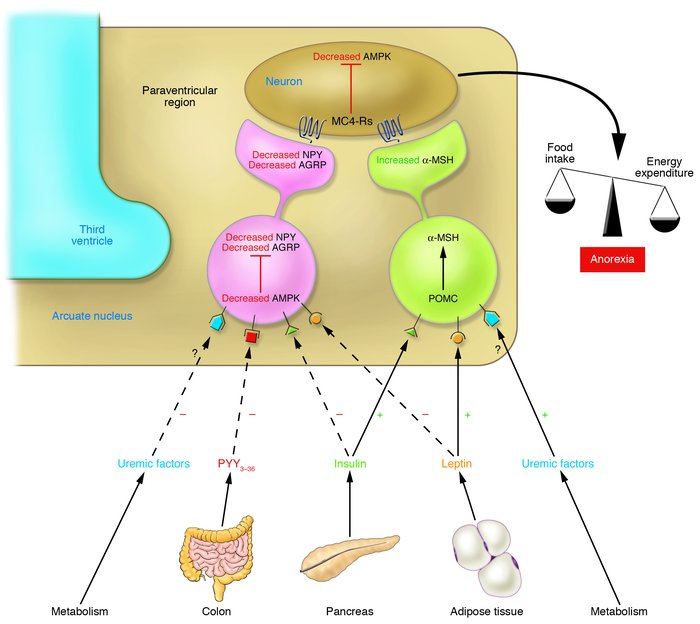 Neuroendocrine mechanisms that can cause anorexia. Hormones produced by the pancreas (insulin), adipose tissue (leptin), colon (PYY3_36), and possibly metabolites (uremic factors) that accumulate in patients with CKD are long-term factors that result in anorexia. Responses to these factors result in increased activity of MC4-Rs, which suppresses AMPK activity and leads to decreased food intake, increased energy expenditure, and weight loss. MC4-R activity is increased by 2 pathways: suppression of short-term, antagonistic, orexigenic hormones NPY and AGRP; and activation of POMC-expressing neurons to produce α-MSH, which directly stimulates MC4-R. High levels of insulin, leptin, and possibly uremic metabolites can activate both pathways that stimulate MC4-R. The influence of ghrelin is less clear, as the stomach produces ghrelin when appetite rises, but this source of ghrelin appears to be less important in stimulating hunger than ghrelin that is produced in the hypothalamus. Figure modified with permission from ().