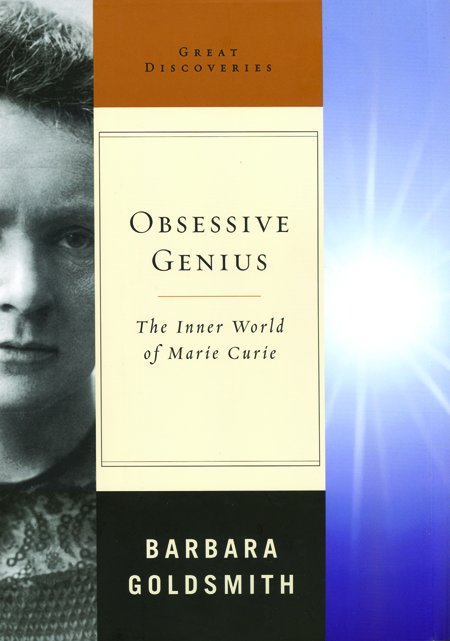 Most scientists, especially women, are fascinated by Marie Curie. In the early part of the twentieth century, when professional opportunities for women were rare, she was the first woman to obtain a doctoral degree from the Sorbonne. Curie carried out groundbreaking research, providing the first detailed description of radioactivity and using its detection to discover two new elements: polonium and radium. She was awarded Nobel prizes in physics (1903) and in chemistry (1911). In 1995 her (still-radioactive!) ashes were interred in the Pantheon in Paris, making her the first and only woman to receive such an honor.

Obsessive genius: the inner world of Marie Curie, a biography by Barbara Goldsmith, appears at a time when women are still underrepresented in most fields of science. Perceptions that women are less competent than men in math and science persist, although there is no evidence to support the idea. There is also the opinion that achieving professional success in science is so demanding that women who wish to pursue a scientific career must forgo family life.

Curie’s life and accomplishments directly contradict these ideas. She overcame significant prejudices against professional women. She combined her scientific career with a fulfilling and devoted marriage to Pierre Curie, her scientific collaborator. After her husband’s death, Curie raised their two daughters alone. Understanding her life provides insight and inspiration for all scientists.

Goldsmith’s work is compact and readable. Her goal is to understand the real woman behind the myths created by the general public and Hollywood filmmakers. To a significant extent, she has achieved this goal. Goldsmith has drawn heavily from primary sources, including Curie’s publications, diaries, and journals as well as family biographies, some of which have only become available recently.

The book is successful on several levels. The scientific questions that Marie and Pierre Curie investigated are explained in a way that makes them easy to understand, even for lay readers. Goldsmith also provides a context for the Curies’ discoveries by describing the personalities and scientific achievements of their contemporaries, including Rutherford, Becquerel, and Röntgen.

Goldsmith describes each phase of Curie’s life with candor and an appealing lack of sentimentality. Her tone, while basically sympathetic, is analytical and nonjudgmental. The section on Curie’s formative years is particularly fascinating. Curie was the fifth child of impoverished intellectual parents in Poland. Her parents placed importance on academic achievement and had a low opinion of “frivolous” concerns such as social life, pleasure, or personal appearance. In fact, her father was never satisfied with Curie’s accomplishments. As he was dying, she told him she had succeeded in purifying radium. He commented, “What a pity it is that this work has only theoretical interest.”

Her time as a governess in Poland, where she fell in love with the son of her employers, is described in a straightforward way, along with the family’s rejection of their marriage. Curie survived this personal disappointment by immersing herself in scientific study, a pattern often repeated in later life. Her days as a poverty-stricken student in Paris are also recounted, without exaggeration.

The most striking aspect of Curie’s life, and a continuing theme in the book, is her persistent devotion to her research. She was not deterred by physical or personal hardships. Her notable qualities were a love of science, high intelligence, the strong conviction that her work would provide important benefits for humanity, and the ability to persevere in light of the difficulties she faced.

Goldsmith does not shy away from aspects of Curie’s life that show her personal weaknesses. She suffered throughout her life from bouts of depression. As a mother, she was driven more by a desire to fulfill her parental duties than by any strong affection for her daughters. After Pierre’s death, she had a love affair with a married colleague, which led to a scandal when her letters to him were released to the press. Most remarkably, she was unable to achieve an unbiased understanding of the dangers posed by the radioactive elements she had discovered. While many of her contemporaries began to appreciate the increasingly apparent dangers of radioactivity and took precautions to protect themselves, Curie used her bare hands in her work and often pipetted by mouth. She even kept a vial of pure radium salts by her bedside to enjoy its “fairy-like glow.”

Nevertheless, there are times when the book is disappointing, when more detailed information is sorely needed. For example, why did Curie refuse to allow Lise Meitner, another talented female physicist, to join her laboratory? Why did she delay providing the pure radium she had promised to the world community for use as a standard? Did installation of her daughter as director of the Curie Institute indicate good scientific judgment or nepotism? It is not clear whether Goldsmith failed to pursue these issues out of a desire to shield Curie’s historical reputation or whether information was simply not available.

This biography is an important addition to the literature on Marie Curie. From it emerges a better understanding of a very unusual woman who was a giant among scientists of either sex or any age. The story of Curie’s life makes the point that the most important thing for a scientist is to possess a passion for discovery — to be energized by curiosity and the ability to pose scientific questions and design experiments to answer them.