An emerging body of evidence implicates peripheral and central endocannabinoid pathways in the regulation of feeding behavior and body weight. A report in this issue of the JCI demonstrates the presence of a common endocannabinoid-regulated molecular pathway for peripheral lipogenic and central appetitive regulation. This pathway involves the activation of the transcription factor SREBP-1c and its associated enzymes, acetyl-CoA carboxylase-1 and fatty acid synthase, in the liver and hypothalamus. Activation of cannabinoid receptor 1 (CB1) in liver plays a key role in increased serum lipid production, fatty liver, and possibly diet-induced obesity. Conversely, stimulation of these receptors in the hypothalamus may lead to an increase in food consumption. Thus, targeting both of these pathways with CB1 antagonists could promote sustained weight loss and favorable serum lipid profiles in obese patients. 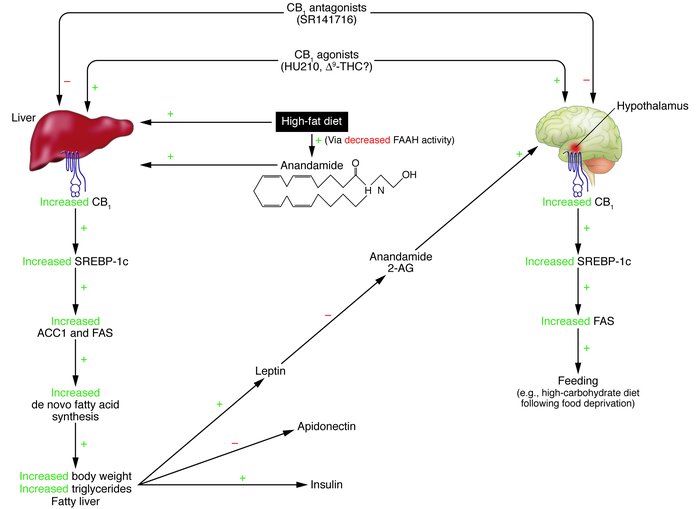 Proposed model for the dual role of the endocannabinoid-mediated pathway in regulation of peripheral metabolic and central appetitive processes in liver and hypothalamus. In liver (left), a high-fat diet leads to increased CB1 levels as well as increased levels of anandamide, the latter of which result from decreased activity of FAAH, the primary enzyme responsible for this endocannabinoid’s catabolism. CB1 stimulation increases expression of the transcription factor SREBP-1c and its associated enzymes, ACC1 and FAS. Stimulation of this pathway leads to a functional increase in the rate of de novo fatty acid synthesis in liver and the increased occurrence of fatty liver and obesity. Through either direct or indirect mechanisms, this pathway also regulates plasma levels of hormones associated with metabolism and feeding, including insulin, leptin, and adiponectin. These altered levels of hormones may negatively affect feeding behavior and metabolism. For example, exogenous administration of leptin leads to decreased levels of anandamide and 2-AG in the hypothalamus and consequently inhibits feeding behavior. Conversely, stimulation of CB1 in the hypothalamus (right) activates SREBP-1c and FAS, which leads to a hyperphagic response to a high-carbohydrate meal following a fast. Disruption of CB1 signaling through the use of CB1_/_ mice or SR141716 (Rimonabant) administration blocks both pathways, leading to a net effect of decreased fatty acid production and prevention of hyperphagia.