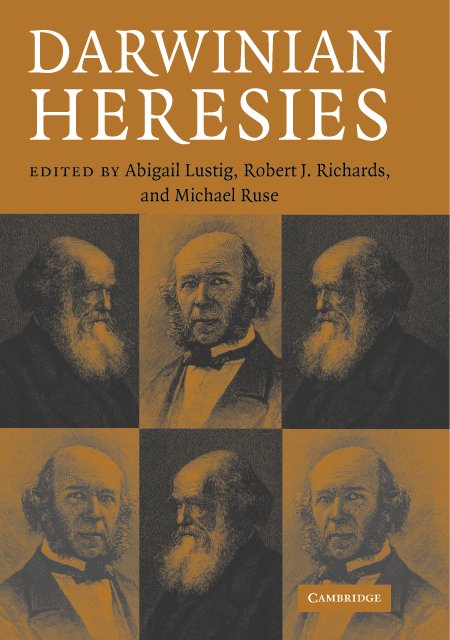 Aside from the Bible, Darwin’s The origin of species is arguably the most important book ever written. Its publication unleashed a torrent of outrage, and epithets ran well beyond the cry of “heresy.” Almost a century and a half later, emotions surrounding the book and its implications still run high.

Darwinian heresies is a collection of eight essays by historians and philosophers of science who examine the history of evolutionary thought and consider some of the problems facing contemporary evolutionism. The book makes an effort to show that throughout its existence the field of evolution has been rife with controversy. Moreover, it suggests that a kind of orthodoxy has settled over the field that blinds us to much of the real history of evolutionary thinking.

What constitutes heresy? Like beauty, it must be in the eye of the beholder. Kimura’s concept of neutral evolution (by which inconsequential amino acid replacements in proteins may account for the bulk of sequence differences between species) is not mentioned in this book even though it was regarded as heretical by many biologists when it was first introduced in the late 1960s. Today it is a part of Darwinian orthodoxy. In the same vein, that altruism might be a genetically conferred trait may seem as heretical to some as the notion of Lamarckian inheritance of adapted traits (for example, muscular strength being inherited by the offspring of parents who exercise). Similarly, the suggestion that free will may disappear into the complex convolution of genes and experience still bothers many evolutionists who consider such ideas heretical. As in all human affairs, it can take time for new scientific ideas to be accepted.

Because the matter of evolution has been an emotionally charged issue from the outset, it is easy to cast individuals and their contributions retrospectively as heretical, given the changing backdrop of progress. Much of this book’s emphasis reexamines conflicts that dominated the second half of the 19th century: intrascientific squabbling, on one plane, and religion versus science, on another.

Several of the chapters are devoted to how different scientists responded to Darwin’s ideas of natural selection and why. Robert Richard’s distillate of his earlier work on Ernst Haeckel certainly makes a reader want to know more about this remarkable Darwinian disciple — hardly a Darwinian heretic, however. In the same vein, Michael Ruse’s analysis of how Herbert Spencer might, in some respects, be considered the father of sociobiology is well crafted and appealing, though not heretical.

It is well known that not all evolutionists agreed with Darwin’s notions of natural selection and descent with modification, and outmoded notions lingered on for a considerable period. William M. Wheeler, the eminent Harvard biologist who was the foremost authority on ants in the first third of the 20th century, apparently came dangerously close to Lamarckism, as described in Charlotte Sleigh’s riveting essay “The ninth mortal sin.” Wheeler, an outspoken anti-cleric, used the vocabulary of religion to describe his heretical anti-Darwinian views. Having already dubbed anthropomorphism the “eighth mortal sin,” he had to label Lamarckism number nine.

In another intriguing chapter, which deals with how scientists can be compliantly noncompliant, Daniel Alexandrov and Elena Aronova tell the story of Georgii Shaposhnikov, a biologist working in the period of Lysenkoism in the Soviet Union. In the 1930s, Trofim Lysenko introduced a form of Lamarckism that was popular with Soviet leaders. One of Lysenko’s questionable claims was that winter and spring wheat could be interconverted merely by exposing seeds to heat and light. In the 1940s, Shaposhnikov conducted an interesting experiment dealing with the adaptation of aphids grown in parthenogenetic culture on natural and unnatural plant hosts. The results were perhaps — given the limited knowledge of the times — open to a Lamarckian interpretation. Shaposhnikov, mindful of both changing scientific and societal attitudes, seems to have naturally adapted his own interpretations accordingly.

Ronald Numbers’s fascinating portrayal of how modern day creationists were driven to accept a kind of microevolution by natural selection will doubtless bring renewed and deserved attention to his splendid 1992 book on the creationist movement. In this case, it would seem that it is the creationists who are guilty of a creeping heresy against their own dogmatic beliefs.

Several of the essays address the intractable problem of theology and evolution and the confrontation between evolutionary thought and religion in human affairs. Too often, these involve a he said/she said kind of argument, the outspoken E. O. Wilson and Richard Dawkins frequently being pitted by the authors against the late Stephen J. Gould, who was more of an “accommodationist” on the subject. The matters of sociobiology, morality, free will, and genetically conferred altruism are all mentioned but not really analyzed in a substantive way.

Clearly, there are two general classes of person who accept biological evolution. In one class is the hardcore evolutionist who accepts religion itself as a phenomenon that has evolved on countless occasions during human history. In the other is the liberal religionist who accepts evolution as something God has wrought, for whatever reason. There are extreme views that regard both these positions as heretical.

These are not trivial matters. To deny the collision between science and religion and a difference between the natural and the supernatural is to bury one’s head in the sand. I find it worrisome that there is currently a major move afoot to weld these two inimical worlds.

In this regard, I was surprised at the difference between the views of a natural philosopher and those of scientists I know on contemporary evolutionism and evolutionists. Abigail Lustig, in her chapter on natural atheology, actually suggests that most modern evolutionists may be “quiet theists of one kind or other.” The unlikelihood of this notion is documented in a recent poll in which the overwhelming majority of prominent evolutionists reported themselves to be godless.

Lustig ends her chapter with a flung gauntlet of sorts: “The a priori belief in human exceptionalism provides one of the strongest, if unstated, criteria for judging the plausibility of evolutionary narratives. If we are no longer made in God’s image, then in whose can we cast ourselves? In Darwin’s?”

Lustig misses the main point: the evolutionist doesn’t feel the need to cast himself in any image. That’s what evolution is all about.