In systemic lupus erythematosus (SLE), IL-2 production by T lymphocytes in vitro is impaired. Deficient IL-2 production may be an outcome of a primary SLE T cell disorder that is due to impaired signal transduction. In this issue of the JCI, evidence is presented that an anti-TCR/CD3 complex autoantibody present in SLE sera can bind to T cells and activate the Ca2+-calmodulin kinase IV (CaMKIV) signaling cascade, resulting in downregulation of IL-2 transcription and IL-2 production. Because IL-2 may contribute to the maintenance of T cell tolerance, deficient IL-2 production could promote a breach of T cell tolerance that results in autoantibody production in SLE. 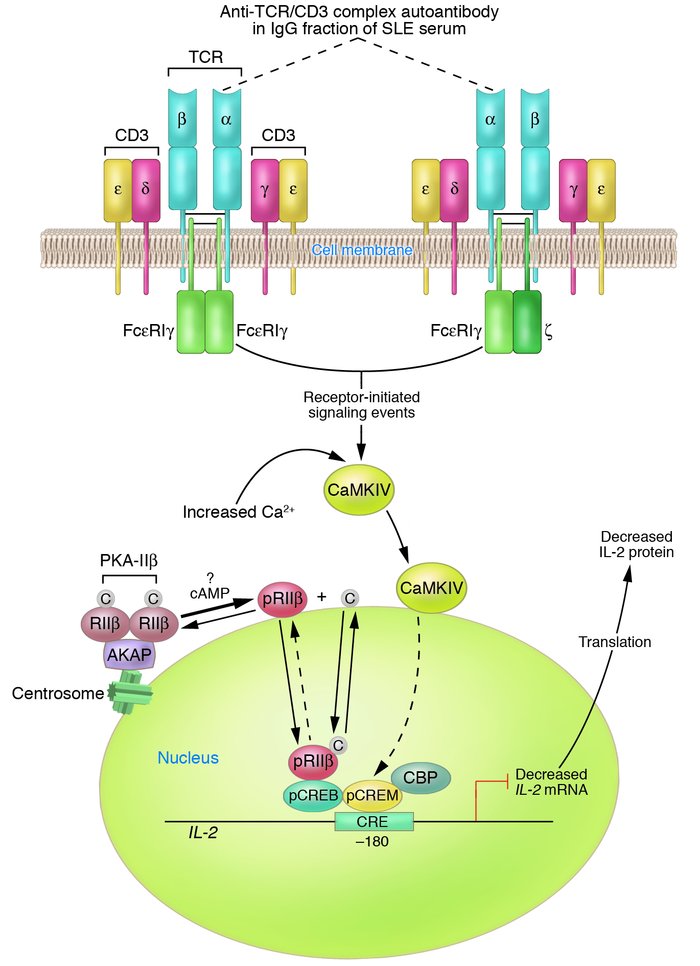 Diagram of established and proposed mechanisms contributing to reduced IL-2 production by SLE T cells. A primary T cell disorder characterized by multiple abnormal signaling molecules has been identified in human SLE. A proportion of TCR ζ chains are replaced with FcεRIγ chains through which signaling can take place. In the microenvironment, anti-TCR/CD3 autoantibody(s) can bind to SLE T cells via the TCR/CD3 complex; however, the subunit(s) of the TCR/CD3 complex against which the autoantibody(s) is directed has not yet been identified. For the purpose of this illustration, the autoantibody is proposed to be against the α subunit of the TCR (dotted lines). Autoantibody binding to the TCR/CD3 complex results in heightened intracellular Ca2+ concentrations and activation of the CaMKIV signaling cascade. CaMKIV translocates to the nucleus, is proposed to phosphorylate CREM, and induces increased pCREM binding to the CRE located at the –180 region of the promoter/enhancer. Because there is overexpression of the RIIβ in the T cell nuclei of some patients with SLE, it is proposed that PKA-IIβ is spontaneously activated by an unknown mechanism and that RIIβ becomes autophosphorylated; pRIIβ translocates to the nucleus, where it mediates downregulation of transcription and IL-2 production. Together, pCREM and pRIIβ inhibit transcription, thus yielding reduced IL-2 production. Note that proposed mechanisms have not been experimentally demonstrated. C, catalytic subunit; CBP, CREB binding protein.