Consumed in the city Observing tuberculosis at century‘s end 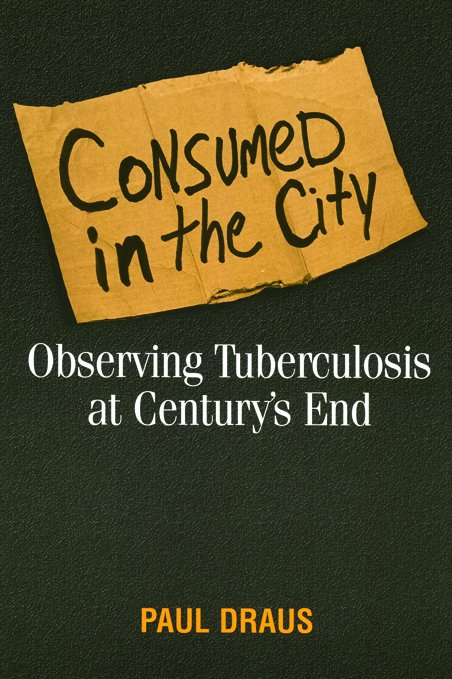 In the early 1990s, the American public was alerted to the reemergence of a once feared but largely forgotten scourge – tuberculosis (TB). Decades of declining TB rates had shifted the focus of medical attention to other priorities, until cuts in public spending and the emergence of a new disease, AIDS, propelled TB back into the spotlight. At this juncture, sociologist Paul Draus initiated a decade of fieldwork to bridge the gaps separating the victims of the ”new tuberculosis“ from the community health systems charged with reigning in the rebounding epidemic. His experiences in the ghettos of New York City and Chicago‘s West Side, where he was an intimate witness to the devastating impact of TB and AIDS, are powerfully recounted in Consumed in the city: observing tuberculosis at century‘s end.

Historically, TB cut a wide swath of devastation across social and economic boundaries, but medical and social advances in the 20th century shifted the burden of the disease almost entirely onto the backs of the poor. A profound association between poverty and TB exists nationally, where TB patients are predominantly immigrants and impoverished inner-city inhabitants, and globally, where a marked inverse correlation exists between national wealth and TB incidence. Draus argues that TB outbreaks are an almost inevitable consequence of social neglect and illustrates why medical interventions not informed by a sociopolitical perspective are ultimately doomed to failure. He pulls no punches, delivering a stinging critique of biomedicine, government, and the media for their roles in stereotyping and stigmatizing those affected with TB – an unfortunate policy that only compounds the difficulty of delivering care to these marginalized populations.

Although Draus occasionally veers toward the polemic, his conclusions are legitimate and important, and doctors, social workers, and scientists concerned about national and global health inequalities and inequities would profit from reading his book. The most fascinating aspect, however, is a series of extensive and essentially raw narratives of individual case histories illustrating the complex interplay of social forces and individual behaviors and their impact on the lives (and deaths) of the TB patients Draus served and often befriended. This approach transforms what might otherwise have been a worthy, if somewhat didactic, treatise into an engrossing page turner.

Through the framework of field notes and recorded conversations with clients, Draus evokes an environment that may be foreign to most of his readers. He succeeds in rehumanizing and individuating a motley cast of characters linked by their experiences of TB and poverty by engaging them as ”participants in the process of healing, rather than recipients of care or education.“ His narratives vividly illustrate the social forces that shape the behaviors of impoverished urban TB patients: the sense of cultural dislocation; the clash between parochial beliefs and lifestyles and ”the rationalist perspective of modern medicine“; and the ways in which long-term hospitalization can sap the ”daily infusion of energy provided by the perpetual struggle for survival.“

From his dual perspectives as a public health worker and ethnographer, Draus observes the physical environments and social networks that contribute to TB transmission. He depicts a milieu where employment and housing are often transient and drugs and alcohol are, paradoxically, both the cement for vital social connections and a crushing burden on the finances and health of the urban underclass. In this blighted environment, focal points of socialization and employment – such as a 24-hour West Side car wash offering flexible low-wage work, a supportive social center, and an informal homeless shelter – are also hot spots for TB transmission. Draus argues that effective delivery of health care in such settings requires an ethnographer‘s understanding of local conditions, which can only be achieved through firsthand experience.

Draus‘s frustration with the dominant biomedical approach to TB control is a recurrent theme. The target of his criticism is not so much the health care practitioner per se (although he does land a few well-aimed barbs), but rather the prevailing philosophy of care in which individual patients‘ needs are subordinated to the medical objective of curing the infection. He argues that this modus operandi, which fails to incorporate insights from ethnography, is not only dehumanizing but also ineffective. While acknowledging that his vision of a more holistic and humanistic approach to community health is unlikely to be realized anytime soon, Draus does provide some concrete and practicable recommendations. These include paying increased attention to individual patients‘ social histories and forging a closer partnership between medical and public health practitioners. Under current practice, the patient stops being the field worker‘s responsibility as soon as she enters the hospital and stops being the doctor‘s responsibility as soon as she leaves. During these often fraught transitions, far too many patients fall through the cracks. Rather than continue to ”blame the victims“ for these failures, we would do well to heed Draus‘s admonition that ”noncompliance is also a social product, rather than a characteristic of individuals.“