The mold in Dr. Florey’s coat The story of the penicillin miracle 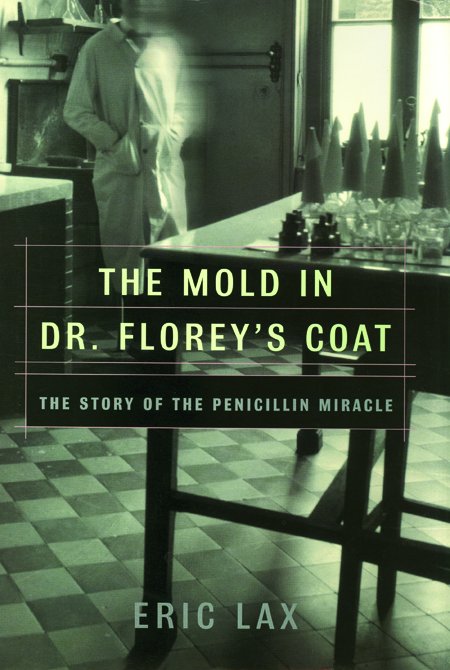 For those of us who have had the good fortune to have lived the majority or all of our lives in the antibiotic era, it is sobering indeed to read accounts of how rather simple infections of the skin and soft tissue could lead to such devastating morbidity, and even mortality, in the years before the advent of penicillin. It is for this reason that the account of how penicillin was discovered and produced is so intriguing to scientists and lay persons alike. Eric Lax’s book The mold in Dr. Florey’s coat: the story of the penicillin miracle is an account of the discovery of penicillin by Nobel laureate Alexander Fleming in 1928 and the production of the β-lactam antibiotic by Norman Heatley and Fleming’s fellow laureates Howard Florey and Ernst Chain at the Sir William Dunn School of Pathology at Oxford University 12 years later.

Lax’s story begins with a chapter introducing Fleming and his now-famous discovery of penicillin. In this chapter, the author spends a great deal of time discussing the validity of the discovery story and tends to discredit Fleming’s account of the initial observations. As it is surely impossible to determine, among other things, where the Penicillium mold came from or at what phase of growth the Staphylococcus was at the time of the contamination, the tedious descriptions of these experiments seem rather unimportant in the grand scheme of things. This is followed by a rather fascinating account of the academic interaction among Florey, Chain, and Heatley. Lax focuses on the problems that developed between Florey and Chain and those resulting from their different scientific philosophies and work habits. There is also a significant amount of discussion that veers from the importance of Howard Florey’s work and instead focuses on the relationships among Florey, his wife Ethel, and his longtime research assistant and mistress Margaret Jennings. Although their interactions were obviously important in the life and work of Florey, especially since he was having an affair with a colleague, a little bit goes a long way. For instance, details revealed in the letters from Florey to Ethel discussing their sex life and his bad breath are best kept between husband and wife and do not necessarily add anything to this story.

I was impressed by Lax’s presentation of the work and attitude of Norman Heatley, a brilliant scientist whom Lax seems to think was the scientific glue that held the project together at Oxford. It was Heatley who used his engineering skills to construct the first extraction apparatus for penicillin and later traveled to the United States to help in the mass production of penicillin by American pharmaceutical companies.

The book ends with a description of the disintegration of the relationship between Fleming and Florey and the rush to secure credit for the discovery of penicillin. Lax’s account of the PR campaigns launched by both St. Mary’s Hospital (on behalf of Fleming) and colleagues of Florey’s (in particular John Fulton) for the Nobel Prize was very interesting and fun to follow. I was, however, disappointed that Lax did not cover the eventual discovery of the chemical structure of penicillin after the awarding of the Nobel Prize to Fleming, Chain, and Florey in 1945 or how the eventual awarding of a patent for the production of penicillin to an American pharmaceutical company may have changed the way academics partner with industry in Britain.

I found this book to be a very entertaining read, especially the interplay between the scientists and other academicians and their struggles due to lack of funds and equipment (a concept near and dear to most of us), all under the constant fear of air raids during World War II. Although the book seems to have been written at times as a soap opera, I recommend it as an initial reference to the discovery and development of production of penicillin. However, other, more scholarly works should also be read, such as Trevor Illtyd Williams’s book on Howard Florey titled Howard Florey, penicillin and after (1) and Gwyn Macfarlane’s Howard Florey: the making of a great scientist (2). I would also recommend those works that particularly focus on Fleming, such as Macfarlane’s Alexander Fleming: the man and the myth (3).