The promise of stem cells in Parkinson disease

The promise of stem cells in Parkinson disease

Neurotransplantation as a treatment for Parkinson disease reached the stage of human trials over 15 years ago, but the field, which is still in its infancy, has encountered a number of roadblocks since then, both political and scientific. With hope that stem cells may be used as a new source of dopaminergic neurons to replace the degenerating nerve cells in Parkinson disease looming, it is critical that we learn from the past as we work toward achieving new milestones aimed at making this new therapeutic strategy a reality. One of those milestones, which is an important translational step in the development of stem cell technology and the subject of a report in this issue of the JCI, involves transplanting new dopaminergic cell lines to a primate model of Parkinson disease. 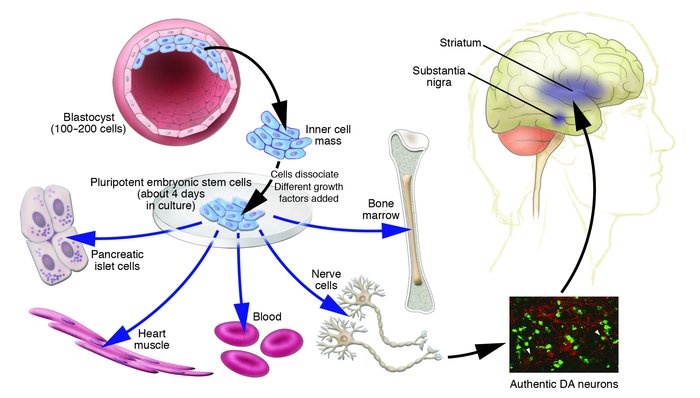 Pluripotent embryonic stem cells are obtained from the inner cell mass of the blastocyst stage of development. These cells have the potential to develop into any tissue type. A variety of different treatments or “cocktails” have been devised to coax these cells into developing into a neuronal lineage and then into authentic DA neurons. Green, BrdU; red, tyrosine hydroxylase–positive (TH-positive) DA neurons (). These are then used for cell replacement therapy by transplantation into the area of the brain where DA nigrostriatal neurons have degenerated. To date, almost all fetal cell transplants have involved putting these cells into the striatum (which lies deep in the brain, below the shaded area in the figure) as have most experimental studies. However, it is still not clear that this is the best target area; it is also possible that it will be necessary to transplant the cells to multiple sites, including the substantia nigra. The major challenge at the current time appears to be getting transplanted DA embryonic stem cells to maintain their DA phenotype in large numbers and over a prolonged period of time.