Scurvy: How a surgeon, a mariner, and a gentleman solved the greatest medical mystery of the age of sail 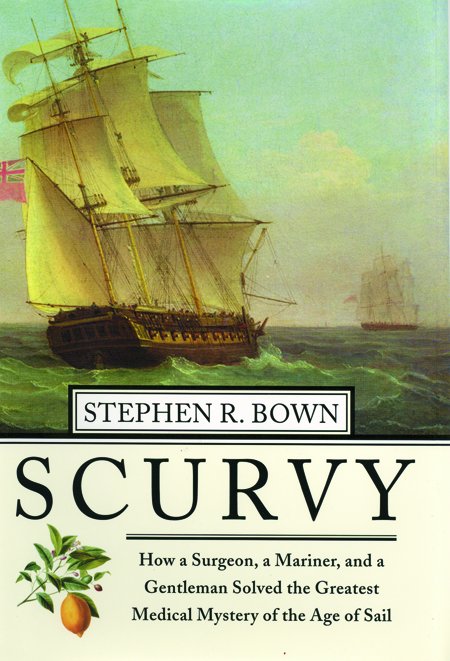 Though scurvy — caused by a dietary deficiency in vitamin C — had been recognized and puzzled over since the time of the Greeks, it had failed to capture the scientific minds of Europe until the Age of Discovery, when mighty sailcraft and their crews, braving the oceans to seek out new lands, returned decimated by the disease. More sailors lost their lives to scurvy during the 15th to 17th century than to war, storms, shipwreck, or other diseases combined.

Sailors were often at sea for months without seeing shore and, even when in port, officers of naval ships were so keen to prevent desertion of impressed sailors that crews were typically confined to ships anchored offshore while they were reprovisioned with hardtack and salted meat. Wrote a mariner voyaging with Magellan in 1519, “they ate biscuit and when there was no more of that they ate the crumbs, which were full of maggots and smelled strongly of mouse urine . . . Mice could be sold for half a ducat a piece, and still many who would have paid could not get them.” On that three-year voyage, a crew of 250 was whittled to a mere 18 men. This foul diet led to disease, as William Clowes, a naval surgeon, writing in 1596, recorded it: “Their gums were rotten even to the very roots of their very teeth, and their cheeks hard and swollen . . . Moreover they were full of aches and paines, with many blewish and reddish staines or spots, some broad and some small like flea-biting.”

Cures for scurvy had been advanced for ages, with ill-founded theories of humoral imbalance or putrefaction their only basis. The European Enlightenment — an intellectual movement that idealized progress, science, and reason — was slow to reach the medical province and, when it did, was manifested in medical philosophies that sought unified theories of bodily function and disease, which led to even more misguided proposals for treatment, including purgatives, barley malt, alcohol, and bloodletting.

In Scurvy, Stephen R. Bown chooses, in a smart but often sensational tone and with no sparing of the blood, guts, and glory of the high seas, to focus on four men: George Anson (whose 1740 voyage brought the ravages of scurvy into the public eye), surgeon James Lind, explorer James Cook, and the young, aristocratic physician Gilbert Blane. A deft historian, Bown weaves the influence of scurvy into the telling of Napoleon’s defeat by the Spanish Armada, and, directing a few less-than-subtle jabs at Dava Sobel, author of the best-selling Longitude, Bown champions the citrus-based cure for scurvy over the determination of longitude in terms of historical importance.

Bown details the dozens of times the cure for scurvy was discovered by chance and subsequently lost. Influential physicians sharing the blame range from Boerhaave to the Scottish aristocrat and long-time president of the Royal Society, Sir John Pringle, whose political influence was great enough to squelch negative reports of his ineffective barley malt cure. The horrible nature of the disease gave Dutch physician Severinus Euglenius reason to think scurvy was caused by “divine permission, as chastisement for the sins of the world.”

Wrote James Lind, in 1753, on the state of medical knowledge, “theories were invented, galenical, chymical, and mechanical, according to the whim of each author, and the philosophy then in fashion . . . The learned ignorance of the age lay concealed under a veil of unmeaning, unintelligible jargon.” Lind conducted one of the first controlled clinical trials in medical history on board the HMS Salisbury in 1747, concluding that citrus juice was a more effective treatment for scurvy than five other standard treatments, from seawater to laxatives.

Despite clear evidence, Lind’s recommendations were largely ignored during his lifetime because of prevailing theories and theorists — while pretentious and misguided scientific debate raged on in the Royal Society, scurvy was killing tens of thousands of mariners.

Though James Cook, sailing around the world three times in the years preceding the American Revolution, finally kept scurvy at bay through insistence on impeccable hygiene among his crew and on obtaining fresh produce for meals, as well as through broad use of antiscorbutics including citrus juice, politics forced him to champion Pringle’s wort of malt in public. It was Gilbert Blane who rediscovered Lind’s experiment and advocated the use of citrus fruits after Pringle’s death.

Bown’s book can be taken as a parable, the story of humble empiricism triumphant over the arrogant posturings of medical theory. James Lind, the story’s tragic hero, possessed the classic hubristic impulse to couch his remarkable discovery in a wild and unsubstantiated theory, one so complex and esoteric that Bown can barely bring himself to describe it — “Lind’s theory of the cause of scurvy is as preposterous and hare-brained as any of the theories he so eloquently criticized.”

Blane, now heralded as the father of naval medicine, wrote of citrus fruits in the 1780s, “upon what their superior efficacy depends, and in what manner they produce their effect, I am at a loss to determine, never having been able to satisfy my mind with any theory concerning the nature and cure of this disease, nor hardly indeed of any other.” It would be 150 years before vitamin C would be isolated and characterized. By then, thanks to the keen eyes and clear thought of a few men, the disease had been nearly eradicated from the developed world.