There has been some debate about the disease-invoking potential of Staphylococcus aureus strains and whether invasive disease is associated with particularly virulent genotypes, or “superbugs.” A study in this issue of the JCI describes the genotyping of a large collection of nonclinical, commensal S. aureus strains from healthy individuals in a Dutch population. Extensive study of their genetic relatedness by amplified restriction fragment typing and comparison with strains that are associated with different types of infections revealed that the S. aureus population is clonal and that some strains have enhanced virulence. This is discussed in the context of growing interest in the mechanisms of bacterial colonization, antibiotic resistance, and novel vaccines. 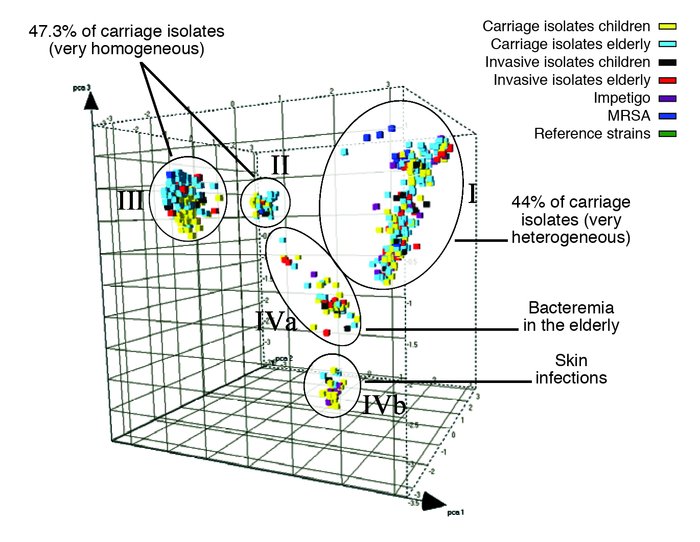 Principal component analysis of 1,056 strains reveals genetic clusters of hypervirulent clones (). The different cubes, plotted here in a 3D space and colored according to their source, represent each strain analyzed in the Melles et al. study. The 5 circles indicate the 3 major (I, II, and III) and 2 minor (IVa and IVb) different phylogenetic clusters identified by AFLP. While strains from each of the genetic clusters are essentially able to cause invasive disease, some clusters contain proportionally more invasive isolates.