Regulation of immunity by lysosphingolipids and their G protein–coupled receptors

Regulation of immunity by lysosphingolipids and their G protein–coupled receptors

T and B lymphocytes, as well as endothelial cells, express distinctive profiles of G protein–coupled receptors for sphingosine 1–phosphate, which is a major regulator of T cell development, B and T cell recirculation, tissue homing patterns, and chemotactic responses to chemokines. The capacity of drugs that act on type 1 sphingosine 1–phosphate receptors to suppress organ graft rejection in humans and autoimmunity in animal models without apparent impairment of host defenses against infections suggests that this system is a promising target for new forms of immunotherapy. 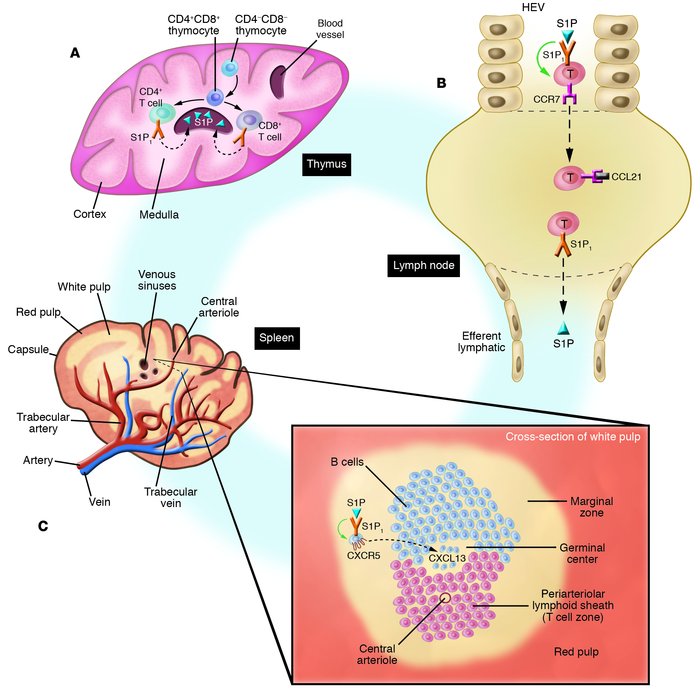 Control of lymphocyte development and traffic by S1P and S1P1. () Thymus. CD4_CD8_ thymocytes develop into “double-positive” CD4+CD8+ thymocytes in the cortex; at the corticomedullary junction, these differentiate into CD4+ helper/inducer T cell precursors or CD8+ suppressor/cytotoxic T cell precursors, which first express fully functional S1P1 GPCRs. S1P in venous sinuses stimulates movement of CD4+ and CD8+ T cells out of the thymus and into the circulation. Dashed arrows show chemotaxis. () Lymph nodes. Plasma concentrations of S1P in the HEVs signal through S1P1, causing significant inhibition of T cell chemotaxis (green arrow) to chemokines such as CCL21, which attracts T cells through CCR7 receptors into the lymph node. T cell activation, through the T cell antigen receptor or by endotoxin, downregulates S1P1 GPCRs, decreases inhibition of chemotaxis, and thereby promotes chemotactic responses to chemokines with a consequent increase in T cell influx into lymph nodes. In the lymph node, T cells downregulate chemokine receptors and respond chemotactically through S1P1 GPCRs to the concentration gradient of S1P from the lymph node to efferent lymph, with subsequent efflux from the lymph node and reentry into the blood. Dashed arrows show chemotaxis. S1P1 and CCR7 are both GPCRs. () Spleen. The white pulp of the spleen, which contains T and B cells, surrounds central arterioles coursing from trabecular arteries to veins. As shown in the cross-section of white pulp, T cells are localized principally in the periarteriolar lymphoid sheath, but B cells are distributed in the germinal center, B cell corona above the germinal center, and marginal zone, where they are more quickly and completely exposed to blood-borne factors. Of all B cell locations, the concentration of S1P is predicted to be highest in the marginal zone, where it signals inhibition of B cell chemotaxis (green arrow) to the chemokine CXCL13 through its GPCR CXCR5.