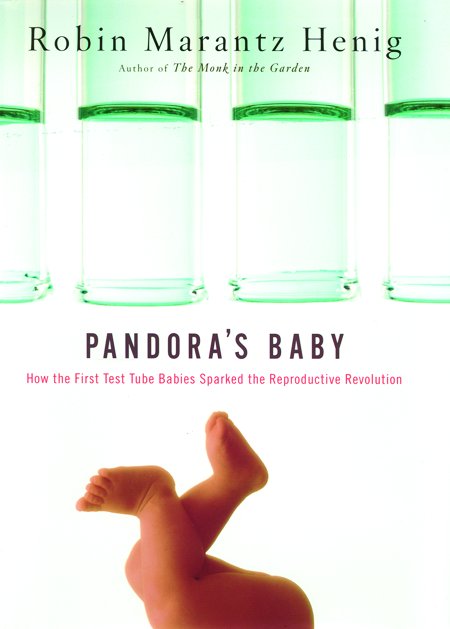 In her book Pandora’s baby: how the first test tube babies sparked the reproductive revolution, Robin Marantz Henig discusses the history of in vitro fertilization (IVF) and the dilemmas it posed to the scientific community and to society at large. Henig begins the discussion by presenting the Del Zio case, in which a couple, unable to conceive a child, put their hope in an eccentric physician, Landrum Shettles. Because of the frequency of in vitro fertilization procedures today, we are perhaps unaware of the image of John Del Zio holding a corked test tube containing his wife’s eggs in one milliliter of follicular fluid, tucking it inside his jacket while hailing a cab in New York. Yet the Del Zios’ unsuccessful attempt to conceive via IVF occurred a mere thirty years ago. Henig describes society’s reaction to in vitro fertilization at that time as a medley of fear, skepticism, and anxiety, whether imagining either the success or failure of this technique.

Today, similar feelings arise in debates concerning cloning and stem cell research. This suggests that thirty years from now, a similar book will be written about the advancements achieved in these fields. While Henig focuses on the fears raised by reproductive technology, such anxiety can be provoked by any advancement in science or technology to which society is unaccustomed. These adaptations of society are reminiscent of the days of recombinant DNA research and the controversy surrounding it.

In telling the history and progress of in vitro fertilization, Henig includes brief lessons in reproductive biology for the lay person, describing, for example, the development of an egg from fertilization to the blastocyst stage. Yet she manages to incorporate these synopses in such a way as not to alienate the scientist. She also draws on Greek mythology, as in the title’s reference to Pandora, including stories involving Prometheus and Apollo, to illustrate society’s fear of the power of humans, the power of knowledge, and, more relevant here, the power of scientific discovery. With every new practice, society is apt to create a system of checks and balances to avoid a “slippery slope” ending in disaster. It is interesting to chronicle the events that led to today’s in vitro fertilization system, especially when this commentary mimics eerily similar events concerning stem cell research and cloning, e.g., US government-imposed bans and indefinite moratoriums on specific research areas. It makes one wonder whether it is wiser to impede progress because of the unknown or whether the unknown demands progress.

It is apparent that Henig has thoroughly researched this topic. She has discussed the contributions of the pertinent national and international medical doctors who either attempted to or succeeded in fertilizing an egg outside of the womb and implanting it back in the mother. The result of such research was the birth of Louise Brown, the first “test tube” baby, reported by Patrick Steptoe and Robert Edwards in 1978. However, Henig merely touches on the work of the key researchers who not only made such fertilization possible but who also enabled the success rates that IVF clinics claim today. For example, Min-Cheuh Chang’s career is mentioned only briefly, even though he deserves much credit for the achievability of IVF, for it was he who revealed the process of sperm capacitation and manipulated this process to occur in vitro (S1). Without his discovery, Steptoe and Edwards might not have achieved the success they did. While there are considerable differences between the reproductive systems of mice and humans, most of what is known about humans originates in experiments with animal models. Even today, basic science provides IVF clinics with the necessary tools to achieve high success rates; only recently, for example, did clinics begin to culture embryos in groups in a small volume of culture media, because research indicated that this results in superior embryo development (S2). To Henig’s credit, the purpose of this book is not to recount the scientific details leading to IVF’s success, but rather to present the journey of a society struggling with the moral issues of IVF becoming a success.

Henig has completed a difficult task in writing this book. She presents the pros and cons of IVF, cloning, and stem cell research, while attempting to stay neutral on these topics. This encourages readers to formulate their own opinions on the following questions: When does life begin? Where does the soul originate? What constitutes progress? Is there a point where we have too much knowledge and this threatens to alter the natural path of evolution? Or, can Pandora’s curiosity bring not only sorrow and anguish into our world, but also wonder and happiness?

Henig cites Williard Gaylin’s 1972 New York Times article “The Frankenstein Myth Becomes a Reality”: “The type of questions that normally arise about any new and dramatic technological invention fall into the categories of: can man, will man, ought man.” Using IVF as her example of such a technological invention, Henig addresses this conflict in an informative and unbiased way, leaving the reader to consider such questions. Any book that encourages such thinking is one that should be recommended to scientists and nonscientists alike, for only with open communication can scientific progress that is beneficial to society be successfully achieved.