Lenti in red: progress in gene therapy for human hemoglobinopathies

Lenti in red: progress in gene therapy for human hemoglobinopathies

Hemoglobinopathies are caused by abnormal structure or synthesis of hemoglobin chains and represent serious monogenic disorders. A new study demonstrates that lentiviral vectors can express clinically relevant levels of human transgenic β-globin in red cells of xenografted mice. While some safety concerns must be addressed, this study is an important step toward potential clinical trials of gene therapy for hemoglobinopathies. 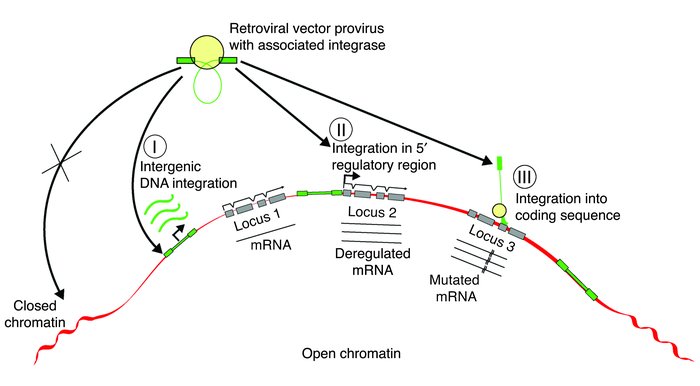 Distribution of retrovirus integration into the cellular genome. Lenti- and other retrovirus vector integration frequently occurs in the vicinity of expressed genes. Integration in intergenic locations, especially at distances of more than 100 kbp’s away from any known gene (I), are least likely to affect the transcription of known genes. MLV-derived vectors appear to have a preference for integrating close to the start of transcription (II), a location especially likely to alter the expression of adjacent endogenous genes. Lentivirus vectors appear to more frequently integrate within the gene (III), a location less likely to affect genetic regulation but potentially more likely to cause disruptions of the mRNA transcript of the endogenous gene.