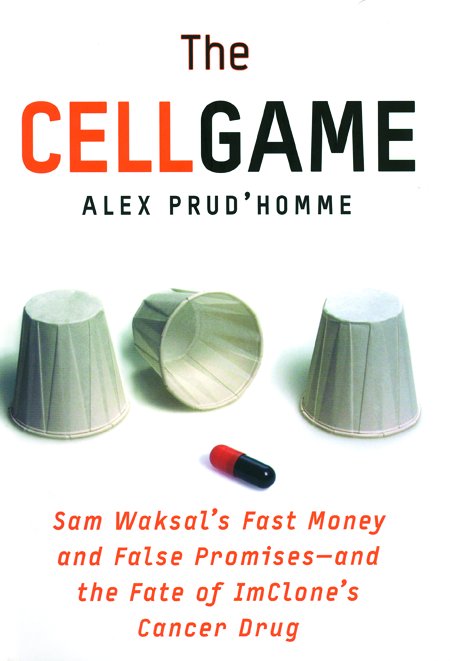 In 1980, doctors John Mendelsohn and Gordon Sato, investigators at the University of California, San Diego, discovered C225, a mouse monoclonal antibody that binds to and inactivates the epidermal growth factor receptor. A little later, it became clear that this receptor, when present in the surface of tumor cells, was involved in the progression of several human cancers. Mendelsohn and Sato then theorized that by blocking this receptor, tumors dependent on it would shrink, thus prolonging the life of cancer patients. A “humanized” version of C225, Erbitux, which was purported to be a “miracle cancer drug,” is the focus of the fascinating story written by Alex Prud’homme in The cell game: Sam Waksal’s fast money and false promises—and the fate of ImClone’s cancer drug.

Prud’homme describes the 1992 meeting between Mendelsohn and brothers Sam and Harlan Waksal, two scientists who had founded a small biotechnology company called ImClone Systems. After this meeting, the Waksals and ImClone took over the task of bringing Erbitux to market. In the spring of 2001, after dramatic patient responses to the antibody were reported at the annual meeting of the American Society of Clinical Oncology, ImClone appeared unstoppable, with Erbitux on a fast track for approval by the Food and Drug Administration (FDA). In September 2001, the blue-chip pharmaceutical giant Bristol Myers Squibb signed a $2 billion marketing deal for Erbitux — the largest amount for a single drug in the history of biotechnology. By the end of 2001, investigational clinical trials indicated that the drug had activity in approximately 20% of patients with colon cancer who were refractory to conventional therapies. However, a number of serious errors in the conduct of the registration trial and the application for approval resulted in the FDA issuing a devastating “refusal to file” (RTF) response to ImClone in December 2001.

The rejection of Erbitux sent ImClone’s stock into a free fall. Sam Waksal tried to save himself financially by trading stock using inside information, destroying evidence, and lying to federal investigators. The Securities and Exchange Commission (SEC) and the US Attorney’s Office investigated Waksal who, after Congressional hearings and a circus-like trial, was sentenced to a seven-year prison term for insider trading. Interestingly, a similar clinical trial with Erbitux in Europe run by Merck KGaA resulted in an almost identical outcome to that of the controversial trial in the US. The findings from this study became the basis for the approval of Erbitux by the FDA for use in patients with colon cancer in late 2003, almost 2 years after the egregious RTF decision issued by the FDA. By that time, Sam’s brother, Harlan, was no longer the CEO of ImClone and the delay in the access of cancer patients to Erbitux was over.

Prud’homme masterfully describes how the happy commingling of money and science led to the birth of the biotechnology industry in the 1970s, and he shows how the identification of cancer-causing genes or oncogenes, whose discoverers were awarded the Nobel Prize in Medicine and Physiology in 1989, accelerated its development. In addition, he provides an enlightened perspective on the long and arduous process of drug discovery, development, and approval and on the consumer-protecting role that the FDA, arguably the most important regulatory agency in the world, plays in this process. These sections of the book represent important educational segments that will be of interest to scientists, patient advocates, physicians, investors, and lay readers. Along the same lines, Prud’homme’s description of compassionate-use programs for novel drugs in development, which allow patients to gain access to potentially effective anti-cancer therapies before they are brought to market, is important practical information not well known by many.

Throughout the book, Prud’homme constantly reminds us that on the other side of the ImClone saga, there are fragile cancer patients and their families who desperately seek a cancer cure or a drug that will prolong their life. Some patients interviewed by the author died while waiting for access to Erbitux, whereas others with more luck benefitted for variable periods of time from treatment with the antibody. In the end, science won, and the hypothesis set forth by Mendelsohn and Sato more than two decades before was proven correct: Erbitux delays the progression of tumors, thus prolonging the life of some cancer patients. However, Erbitux was not the “miracle cancer drug” initially portrayed by ImClone. Prud’homme describes nearly all the major anti-cancer drugs discovered during the last two decades. He points out that none of these are miraculous therapies, thus reminding the reader that it will be the sum of smaller steps, such as the development of Erbitux, and not miracles, that will eventually get us close to the cure for cancer.

Overall, this is a book about hope, about how biomedical science and research can improve patients’ lives, about the magical role of patients and their families in this process, and about how, when big science and big business intersect, human mistakes and weaknesses can sometimes become major hurdles to progress. Hopefully, as the portfolio of new anti-cancer drugs increases logarithmically, this most informed reminder by Prud’homme will help us in avoiding such missteps.