Is it in your genes? The influence of genes on common disorders and diseases that affect you and your family 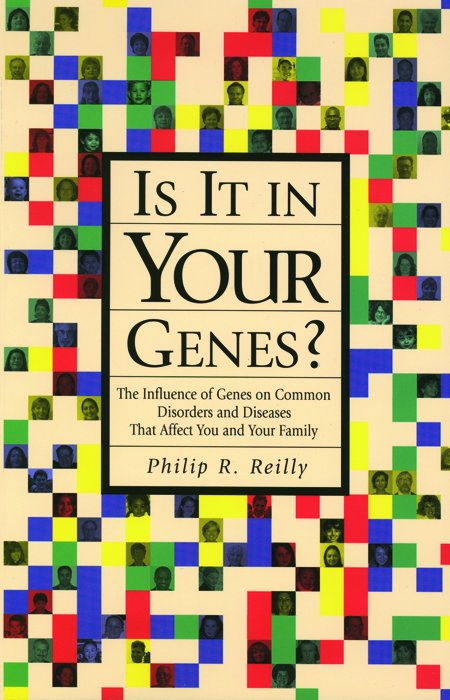 Philip R. Reilly, a physician-geneticist, has written a new book about genetic medicine. In the preface to Is it in your genes? The influence of genes on common disorders and diseases that affect you and your family, Reilly comments that the book is intended “to help people of all backgrounds understand the role of genes in health and disease” and to “stimulate readers to ask their physicians whether a problem in their family might be more strongly influenced by genes than the professionals might at first think.” With a few exceptions, such as a chapter on screening of newborns, Reilly has chosen not to deal with rare, single-gene disorders of childhood. Instead he takes on the challenging task of introducing us to the influence of genes on more common but genetically complex conditions such as obesity, hypertension, diabetes, cancer, Alzheimer disease, and schizophrenia.

Following a brief introduction to genetic terminology, twin studies, and molecular genetics, the book is organized into four major parts corresponding to the human life cycle: pregnancy, infancy, childhood, and adulthood. Each chapter begins with a question that introduces a vignette, such as “Do marriages between first cousins face a greater chance of having babies with genetic disorders?” or “I have two close blood relatives with ovarian cancer. How high are my risks?” Reilly then follows with a brief clinical description and discusses the disease prevalence and risk factors. He next reviews the latest findings of genetic influence on the disease. After perusing the well-organized table of contents, the reader may choose to go straight to certain chapters because of a personal or professional interest. Each chapter is admirably succinct and is self-contained enough so that it may be read alone.

Reading the entire book, however, reveals the remarkable growth of genetic studies in virtually all fields of medicine. There are interesting nuggets of information throughout. In the chapter on eye color, for example, the reader learns that, contrary to popular belief, two blue-eyed parents are capable of having brown-eyed children. Many of the front-page genetic discoveries of the last decade are woven into the chapters on breast cancer, Alzheimer disease, and other diseases. There is much here for those interested in learning more about genetic medicine and those curious about the role of genes in problems ranging from alcoholism to multiple sclerosis, as well as for professional geneticists. Useful tables summarize empirical data on the risk of developing diseases affecting a close relative. Tables such as “Breast cancer: guidelines for referral to a high-risk clinic” may be useful as a quick reference in a more general clinic.

Many of the chapters are first-rate. Reilly writes in a clear, simple style while presenting complicated topics such as the genetics of Parkinson disease or autism. I was amazed by the broad range of nearly 100 conditions, from appendicitis to asthma to Alzheimer disease, covered by a single author, and predictably Is it in your genes? does not always get it right. In discussing apolipoprotein E allele testing for Alzheimer disease, Reilly correctly states that it is not a good predictor of risk but then suggests that the offspring of a patient with late-onset Alzheimer disease could be reassured by finding out that they have one apoE4 (“high-risk”) allele instead of two. This contradicts current recommendations by the American College of Medical Genetics and the American Academy of Neurology with regard to the use of apoE testing. It also ignores the possibility that the offspring could receive the “bad news” that they had inherited two E4 alleles. Unfortunately, Reilly neglects to explain how to obtain professional genetic counseling. He recommends that readers consult their own physicians; yet it is well known that health care providers vary widely in their familiarity with genetic medicine. For those who do want to see a clinician specializing in genetics, the University of Washington website, www.genetests.org, lists clinics by region and specialty. The genetics clinical service at a local medical school is another resource.

In the concluding chapter, Reilly envisions the changes in medical practice that will have occurred by 2024. He predicts that infants will be screened at birth for risks for many genetic disorders and be given a health maintenance program tailored to those risks. He anticipates that pathologists will be performing genetic profiling of tumors during surgery and that the promise of somatic cell gene therapy will be realized. The list of references is current through 2003 and is a valuable compendium of books, reviews, primary references, and websites. The companion website for the book (www.is-it-in-your-genes.org), noted in the text as containing links to online resources and further articles, only contained basic information on this book and its author as of July 26, 2004. These are minor quibbles, however.

This book could do a great deal to enhance genetic literacy. It deserves to be read widely by students of human genetics at all levels, by primary care providers and practitioners in all specialties, by genetic counselors, and by anyone who has wondered whether they or their children are at risk for a disease affecting a family member.