Several years ago it was proposed that the AMP-activated protein kinase cascade might protect cells against stresses that deplete cellular ATP. Young et al. have now directly tested this by studying the effects of ischemia and reperfusion in perfused hearts from mice expressing a dominant-negative mutant that suppresses the kinase activity in cardiac muscle. Compared with control hearts, the mutant hearts showed clear evidence for increased necrotic damage and increased apoptosis. These findings may have implications for the treatment of ischemic heart disease. 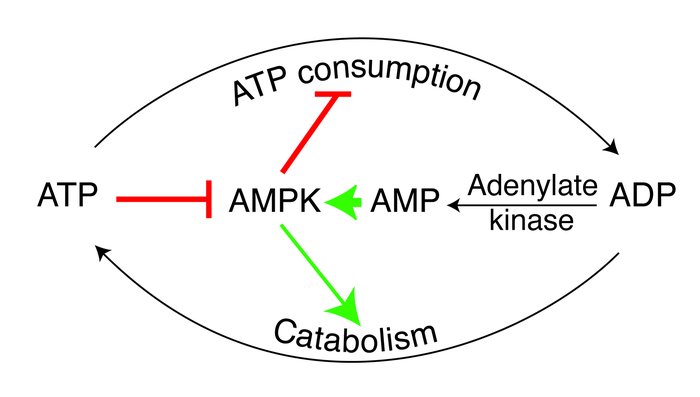 Role of AMPK in regulating energy balance at the single-cell level. The way in which the AMPK system controls the balance between ATP consumption (e.g., by biosynthesis, cell growth, or muscle contraction) and ATP production via catabolism is illustrated. If the rate of ATP consumption exceeds its rate of production, ADP will tend to rise and be converted to AMP by the enzyme adenylate kinase. The rise in level of the activating ligand AMP, coupled with the fall in level of the inhibitory nucleotide ATP, activates AMPK, which then switches off ATP-consuming processes and switches on catabolism in an attempt to redress the balance.