Among the most cost-effective strategies for preventing viral infections, vaccines have proven effective primarily against viruses causing acute, self-limited infections. For these it has been sufficient for the vaccine to mimic the natural virus. However, viruses causing chronic infection do not elicit an immune response sufficient to clear the infection and, as a result, vaccines for these viruses must elicit more effective responses — quantitative and qualitative — than does the natural virus. Here we examine the immunologic and virologic basis for vaccines against three such viruses, HIV, hepatitis C virus, and human papillomavirus, and review progress in clinical trials to date. We also explore novel strategies for increasing the immunogenicity and efficacy of vaccines. 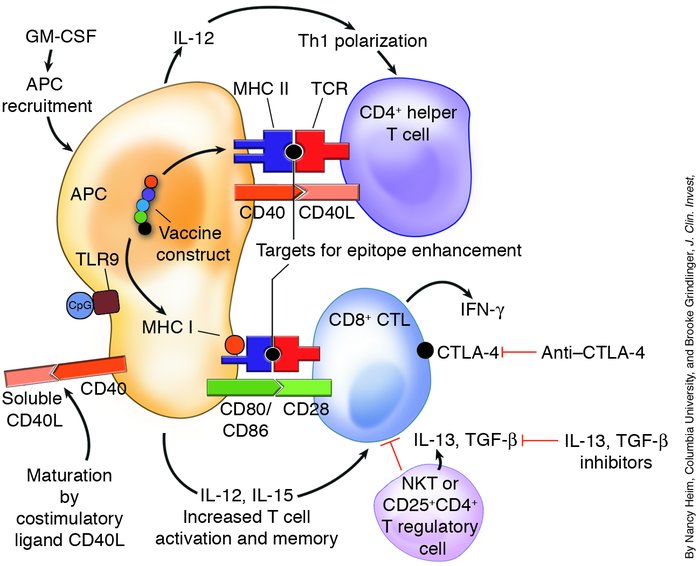 New strategies for second generation vaccines based on cellular immunity. CD4+ helper T cells mature and activate APCs through recognition of epitopes presented by class II MHC molecules (MHC II) and interaction of CD40 and CD40 ligand (CD40L). The CD40-CD40L interaction causes the APC to upregulate expression of costimulatory molecules such as CD80 and CD86 and to secrete cytokines IL-12 and IL-15. The costimulatory molecules interact with CD28 on the CD8+ CTL to provide a second CTL activation signal in addition to T cell receptor (TCR) recognition of an antigenic peptide presented by a class I MHC molecule (signal 1). IL-12 also contributes to activating the CTL and polarizing the T helper cell to produce Th1 cytokines, such as IFN-γ. IL-15 contributes to induction and maintenance of CTL memory and longevity. Regulatory T cells, including NK T cells and CD25+CD4+ T cells, can dampen or inhibit the CTL response in order to prevent autoimmunity, but also reduce the immune response to the vaccine. Various strategies may be employed to improve the natural T cell response. Epitope enhancement of class I or class II MHC–binding peptides can increase their affinity for the respective MHC molecules and their immunogenicity. Incorporation of (a) cytokines such as IL-15 to recruit more memory CTLs; (b) IL-12 to steer the T helper cell population towards a Th1 response; (c) GM-CSF to recruit dendritic cells; or (d) costimulatory ligands such as CD40L to activate and induce maturation of the dendritic cells recruited by the GM-CSF can synergistically amplify the immune response. In addition, CpG-containing oligonucleotides can act through toll-like receptor 9 (TLR 9) to activate dendritic cells. Increased levels of costimulatory molecules can selectively induce higher-avidity CTLs that are more effective at clearing virus infections. Agents that block factors secreted or induced by regulatory T cells, such as IL-13 and TGF-β, can synergize with other strategies to allow the CTL response to reach its full potential. Similarly, blockade of the inhibitory receptor, CTLA-4, on the T cell, can increase the T cell response. See multiple references in the text for the other strategies.