Lonely in Paris: when one gene copy isn’t enough

Lonely in Paris: when one gene copy isn’t enough 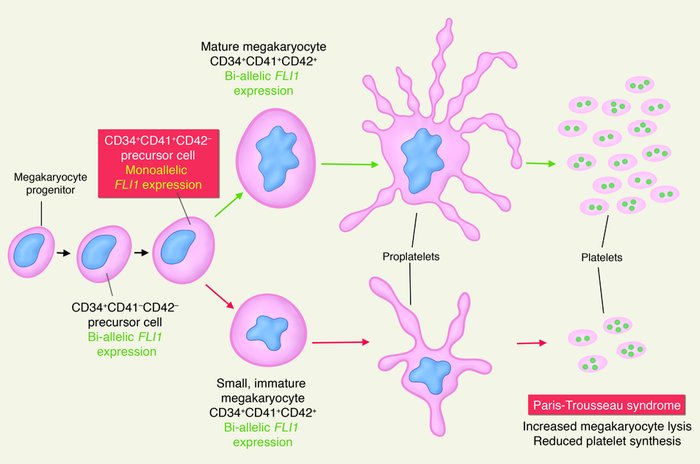 Schema of steps in megakaryocyte differentiation leading to platelet release in normal individuals and patients with PTS. Immature megakaryocyte progenitors, depicted on the left, acquire defining attributes (e.g., polyploidy) and surface markers (e.g., CD41) en route to a terminal step in which the cytoplasmic mass is converted into proplatelets and nascent blood platelets are assembled and released. Megakaryocytes expressing CD41 can be separated from more mature cells that also express the CD42 marker. Raslova et al. () propose that the transition between these two stages is marked by transient monoallelic expression of the gene, an event that is presumed to result in normal cell differentiation, as illustrated in the top right branch of this figure. In PTS, where patients carry a multigene 11q deletion, absence of one allele produces a population of megakaryocytes that is transiently devoid of any transcription. The authors infer that it is this deficit that results in subpopulations of micromegakaryocytes and morphologically abnormal platelets as well as thrombocytopenia, as shown in the bottom right branch. The model potentially explains the genetic and major clinicopathologic features of PTS.