Race: The reality of human differences 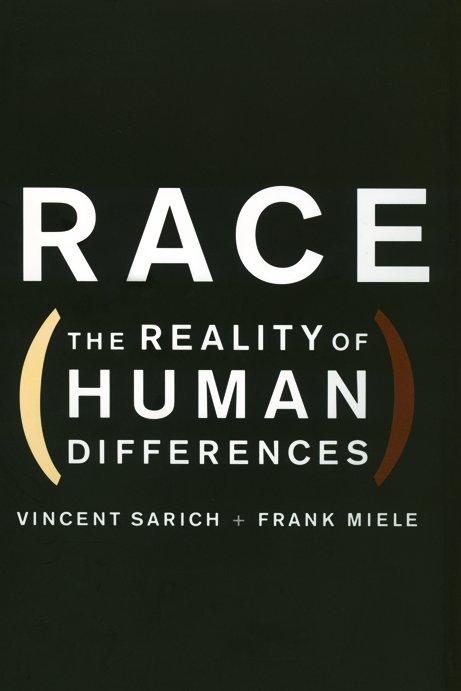 Typically, scientific debates comprise arguments about nuanced distinctions and are resolved by carefully designed experiments or clinical studies. In contrast, the debate about the validity of race as a scientific concept has resembled a political argument in which the participants have staked out extreme positions that admit neither intermediate parsing nor rigorous testing.

In their book, Race: the reality of human differences, Vincent Sarich and Frank Miele advocate the view that racial categories that have been used to group populations for the last 500 years reflect underlying biological differences based on human population history over the last 50,000 years. In their account, the initial migrations of humans out of Africa resulted in genetic differences that roughly correspond to the continents to which people migrated. Sarich and Miele claim that those differences are crucial to biomedical research and practice.

On the other side of the divide is the view that racial categories are historical constructions that have no biological meaning whatsoever. Proponents of this view argue that biological concepts of race inappropriately focus biomedical research and practice on biological rather than social contributors to health disparities. This also serves as scientific legitimization for discrimination against groups of people who are identifiable by a small number of phenotypic characteristics (e.g., skin color). Thus advocates often end up arguing for greater attention to race as a constructed phenomenon but against the use of race or, indeed, any population-specific category in biological, especially genetic, studies. Differences between these two views are difficult to resolve because each contains some demonstrable facts that lend verisimilitude to their more extreme extrapolations.

Sarich and Miele point out that frequencies of the same common genetic variants differ between populations based on the ancestries of their members. In addition, rare variants may be found only among members of some populations. Those differences in the frequencies of common variants and the occurrence of rare variants contribute part, but only part, of the higher risk that some members of those populations have for particular diseases. They are also the reason that most genetic studies are population-specific.

At the same time, other contributors to those higher risks clearly are constructed around perceptions of racial differences, which then become self-fulfilling prophecies. For instance, the belief that African Americans have lower IQs than people of European descent, which Sarich and Miele repeat in this book, has been used to support arguments for policies that maintain economic disparities between racially defined groups. Policies of this type can have the direct effect of, for instance, heightening exposure to environmental toxins and creating barriers to health care for African Americans. This continuing influence of racial perceptions on health is one reason most epidemiological studies use race as a variable rather than relying on race-blind measures such as socioeconomic status.

There are two particularly problematic tendencies among those who, like Sarich and Miele, try to use scientific data to justify policies that treat race as a biological fact. First, there is the untested assumption that biological differences underlie social differences rather than the other way around. Second, there is the practice of extrapolating findings for local populations into generalizations about larger racial categories. These tendencies allow scientific popularizers of race as a biological reality to construct oversimplified models of the relationship between biological and social phenomena and of the histories and interrelationships of human populations.

Sarich and Miele contribute to both these problems by, for example, defending Herrnstein and Murray’s claims, in The bell curve, of racially based differences in IQ and by repeatedly conflating data for particular populations with their notion of super-ordinate races. Perversely, Sarich and Miele's opponents mirror these lapses in scientific rigor by minimizing the contributions of genetic predisposition to chronic diseases and conflating population-specific genetic studies with a racialized science.

Despite repeated assertions of their superior adherence to rigorous scientific standards, Sarich and Miele have written a book that is full of anecdotes and unsupported claims for genetic determinism and that has far fewer citations of peer-reviewed literature than do most popularizations. Most telling, perhaps, is their reluctance or inability to specify how many races they believe exist and what those might be. One would think that if race were indeed a reality, it would be possible to enumerate the biological divisions implied in the concept. The authors also dwell unnecessarily on the ethnic, political, sexual, and religious identities of their historical opponents in this ongoing debate, whom Sarich and Miele characterize primarily as immigrants, communists or socialists, homosexual or bisexual, and, above all, Jewish. This practice tends to confirm the ongoing reality of racism, if not of race.