What price better health? Hazards of the research imperative 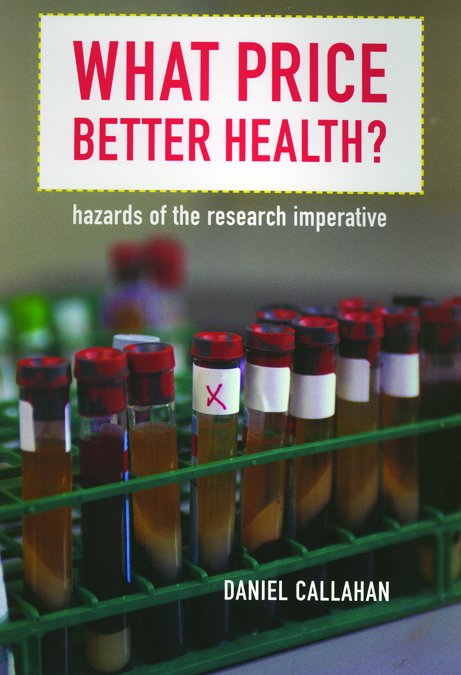 One need only occasionally read the newspaper or even casually follow developments in US health policy to know that now, as never before, medical research and its results dominate both popular imagination and the national economy. The latest book by ethicist Daniel Callahan, What price better health: hazards of the research imperative, explores many of the most important ethical issues that flow from the nation’s medical research enterprise. In an age of seemingly limitless opportunities for scientific breakthrough on the one hand and unsettling evidence of research abuse on the other, the book offers clinical researchers an important ethical guide.

Callahan, Director of the International Program at the Hastings Center and Senior Fellow at the Harvard Medical School, is well known in the field of bioethics, particularly for his writings on health care rationing, religion and bioethics, and the bioethical issues that arise in an aging society. Here Callahan examines what he terms the “research imperative,” which he defines as the “felt drive to use research to gain various forms of knowledge for its own sake, or as a motive to achieve a worthy practical end,” and its implications for a host of issues, ranging from biomedical research policy priorities to research on human subjects and research integrity.

A great admirer of medical research, Callahan nonetheless recognizes the research imperative as a phenomenon that can both benefit and imperil society. For this reason, he argues, medical research should rest on a base of certain “animating ideals,” which he identifies as safety, social beneficence, resistance to market determination, compatibility with sustainable, affordable medicine and equitable access to health care, and public moral acceptance.

Callahan explores how research can best deal with and balance two longstanding concerns: forestalling death and relieving the burdens of aging. He considers the goals of medicine and explores the question of whether research should focus on classic, medically oriented concerns of disease prevention and treatment or should reach more broadly into the world of enhancement of human physical and psychological traits. He examines the intertwined issues of risk/benefit analysis, research involving human subjects (a particularly strong chapter), and the problem of research methods that raise significant moral questions. Later chapters explore public policy matters stemming from both privately and publicly funded medical research activities. Most satisfying, perhaps, is Callahan’s examination of privately funded pharmaceutical research and the twin areas of concern it engenders: privately held property interests that preclude broader national and global benefits and the high cost of pharmaceutical products. The book’s final chapter is devoted to a discussion of how to more closely align medical research with the ideals identified in the Introduction.

The book suffers from two basic limitations. The first is its failure to address at all the closely associated subject of health services research, especially research involving programs for the poor. Beginning under the Clinton administration more than a decade ago, federal and state policymakers, have, in the name of research, embarked upon scores of federally funded “demonstrations” whose only true research aim can be said to be testing the impact on the poorest members of society of significant reductions in subsistence payments and public health insurance, most notably Medicaid. Callahan raises many important considerations, in particular the need for unswerving allegiance to the concept of voluntary participation and informed consent. Indeed, in welfare demonstrations, participation is compelled as a condition of assistance. It is hard to imagine a less worthy goal of research than testing the effects of deprivation on the poor, and yet the bioethics community in general has been AWOL on this matter.

The other limitation has to do with the book’s style. Daniel Callahan is one of the nation’s best-known bioethicists, but he feels a need to regularly remind readers of this fact, through excessive use of the word “I” and frequent references to the important public figures in his life. In addition, Callahan, as an ethicist, should have taken some care to avoid using turns of phrase that, though clichéd, have some negative resonance in specific communities. For example, in the Acknowledgments, Callahan thanks his secretary for performing “the worst kind of stoop labor” in connection with the production of the book manuscript. This reference is somewhat jarring, particularly for any reader who has seen and worked with migrant laborers as they have stooped over in fields. This use of inappropriate imagery lends a strange aura to an otherwise insightful book on research ethics.