What are the true origins of the smooth muscle cells (SMCs) present in the intimal lesions of transplant arteriosclerosis? A new study in the JCI shows that Sca-1+ cells purified from the mouse aortic root can migrate through an irradiated vein graft to the neointima of the vessel and transdifferentiate to express the early SMC differentiation marker gene SM22. Do Sca-1+ cells transdifferentiate into SMC-like cells, or is activation of SMC marker genes a consequence of fusion of these cells with preexisting SMCs, a possibility raised by results of studies of adult stem cells in animal models of liver regeneration ? Or could this be bona fide transdifferentiation that recapitulates the pathologic processes in humans? 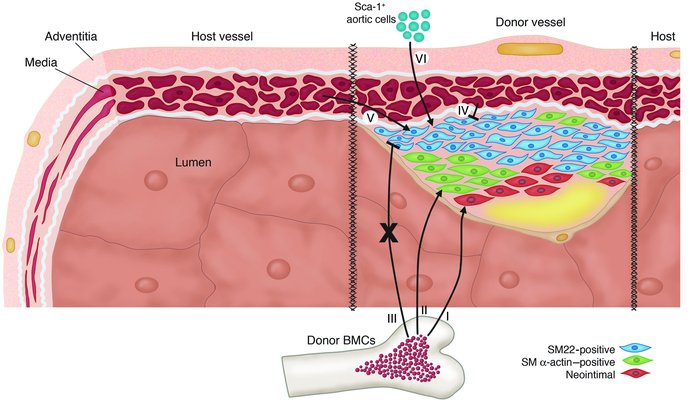 What are the true origins of the SMCs present in the intimal lesions of TA? Hu et al. previously demonstrated that donor BMCs give rise to neointimal cells (I) and that a low percentage costained with smooth muscle α-actin, suggesting transdifferentiation of BMCs to SMCs. (II) However, when SM22- bone marrow was used for lineage tracing, the neointimal cells were SM22- negative, suggesting that the BMC-derived SM α-actin_positive intimal cells were some cell type other than smooth muscle (e.g., macrophages or myofibroblasts) or were not differentiated SMCs (III). Interestingly, cells from the host vessel (V) but not the donor vessel (IV) can give rise to intimal cells that are SM22-positive. However, it must be noted that the failure of donor vessel cells to contribute to the intima appears to be unique to this allograft model, wherein there is virtual destruction of all donor vessel cells, including medial SMCs. Thus, in this allograft model, a key question is, what is the source of the SM22-positive intimal cells derived from the host vessel? In this issue of the JCI, Hu et al. show that Sca-1+ cells purified from the adventitia of the aortic root (VI) can migrate through an irradiated vein graft to the neointima of the vessel and express SM22. These results are of interest in that they identify a potential new source of cells that contribute to neointimal formation in TA. However, several outstanding questions remain: Is this an artifact of exogenous application of the Sca-1+ cells? Does it represent fusion of these cells to SMCs? Or does this represent bona fide transdifferentiation of Sca-1+ cells from the adventitia into SMC lineages?