Blood to brain to the rescue

Blood to brain to the rescue

Neurodegeneration occurs in the majority of the more than 40 known lysosomal storage diseases. Since the nervous system in these disorders can be globally affected, effective treatment would require persistent widespread correction. Biffi et al. show such correction is possible in a mouse model of metachromatic leukodystrophy by the transplantation of hematopoietic cells genetically modified to overexpress the missing lysosomal enzyme. The results reveal a nervous system damage-response pathway that can be harnessed to provide therapy to the nervous system in these serious disorders. 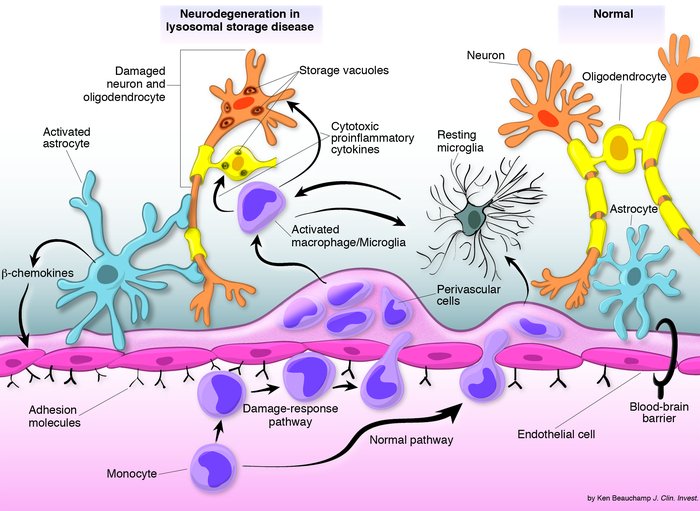 Damage-response pathway in lysosomal storage disease. Normally, nervous system microglia and macrophages can be derived from blood-borne precursors; they pass through the blood-brain barrier into the perivascular regions and ultimately take up residence in the parenchyma as resting ramified cells. When nervous system damage occurs, cytokines and chemokines are generated from activated macrophages/microglia and astrocytes, which can stimulate the up-regulation of adhesion molecules on nervous system endothelial cells, resulting in enhanced transendothelial migration of monocytes from the blood into perivascular regions. These enzyme-deficient cells migrate into the parenchyma to sites of damage where they may secrete potentially cytotoxic proinflammatory cytokines, leading to further damage and cell death. If the hematopoietic precursors are corrected, the macrophages and microglia gain the ability to transfer the missing lysosomal enzyme to deficient cells in the nervous system at sites of damage.