Dysbindin-1 and schizophrenia: from genetics to neuropathology

Dysbindin-1 and schizophrenia: from genetics to neuropathology

The gene encoding dysbindin-1 has recently been implicated in susceptibility to schizophrenia. In this issue of the JCI, Talbot et al. show that, contrary to expectations, dysbindin-1 is located presynaptically in glutamatergic neurons and is reduced at these locations in schizophrenia . Further studies of dysbindin-1 and the proteins with which it interacts can be expected to throw light on the pathogenesis of schizophrenia. 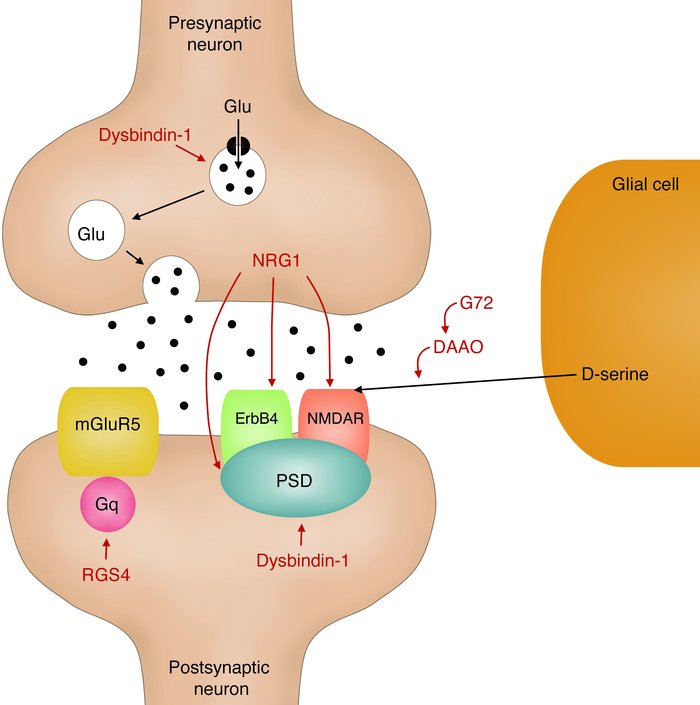 Schematic representation of a glutamatergic synapse. Several genes have been implicated in susceptibility to schizophrenia that can potentially impact on glutamate (Glu) synaptic function including dysbindin-1, neuregulin 1 (), G72, D-amino acid oxidase (), and regulator of G protein signalling 4 (). Dysbindin-1 may influence VGlutT-1 expression, synthesis, or degradation and is a component of the postsynaptic density (PSD). NRG1 is present in glutamate synaptic vesicles, regulates expression of -methyl--aspartate receptors (NMDARs), activates ErbB4 receptors, which colocalize with NMDARs, and interacts with the PSD. G72 interacts with DAAO, which oxidizes -serine, an endogenous modulator of NMDARs. RGS4 is a negative regulator of G protein_coupled receptors, especially the metabotropic glutamate receptor 5 (mGluR5), via its effects on the G protein Gq. Figure modified with permission from ().