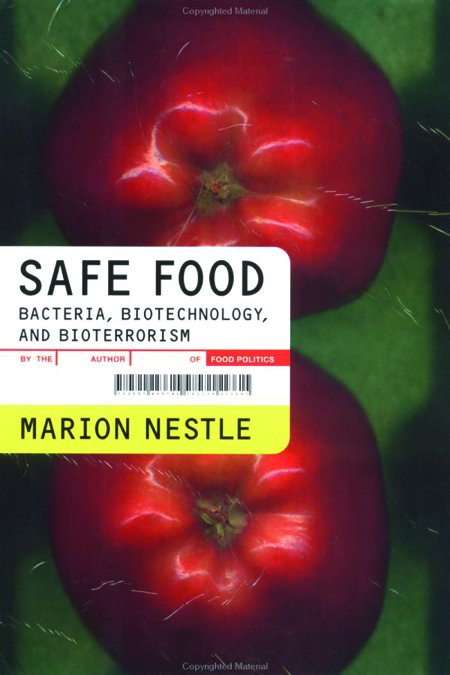 Marion Nestle, author of a recently acclaimed book on food politics, has written a new book devoted to food safety. It is addressed to general readers as well as scientists who wish to know more about the issues underlying disputes about the safety of our food supply but who lack prior knowledge about the food industry, its lobbying and marketing strategies, or the political regulation of food supply and public health. Nestle’s decision to write this book appears to have been partly inspired by the extensive media coverage in recent years given to food scandals, food-borne human diseases, fears with regard to genetically modified foods, and, recently, consideration of the vulnerability of food and water supplies to terrorist activity.

This new book presents the thesis that food safety is a political issue. Sections on pathogens in the food supply and food biotechnology are followed by a concluding section that summarizes the main arguments, reviews the reasons why the food supply might serve as a medium of terrorist activity, and makes a number of grounded recommendations regarding the future of food safety.

A safe food, according to Nestle, is “one that does not exceed an acceptable level of risk” (p. 16). Decisions about acceptability, it is argued, involve opinions and values, as well as science. For this reason, a “science-based” approach to food safety, which balances risk against benefits and costs and contributes to the estimation of risk, is distinguished from a “value-based” approach focused on the acceptability of risk, which tends to balance risk against dreaded outcomes or feelings of outrage. This point is not presented here in the familiar form of a distinction between expert and lay perceptions of risk. The author recognizes the fact that scientific questions do not arise in value-free contexts and that value-based approaches often consider scientific arguments. The argument is rather that when commercial interests are at stake in decisions about the acceptability of risks, these decisions unavoidably become political issues. Nestle points out that it is often difficult to distinguish science-based from value-based aspects of conflicting policies. Most of the book is accordingly devoted to examining actual disputes about food safety in a manner that distinguishes these aspects.

Nestle has sought to write a balanced book rather than a political manifesto. Her perspective is that of a trained scientist and professional nutritionist with considerable experience in consultancy and other dealings with both the food industry and public authorities engaged in the tasks of regulating the safety of food supplies. Nestle is critical of players in both of these fields. She claims and seeks to demonstrate that food companies tend to accord priority to commercial interests rather than consumer protection, even to the point of strongly resisting public policies designed to control pathogens in the food supply, while government agencies often tend to support business interests at the expense of public health. These views are controversial and are unlikely to convince all stakeholders in food safety issues. Nevertheless, they are presented in a series of carefully documented cases, likely to prove useful to readers who approach the text with a view to making up their minds and irritating to those who feel themselves criticized. It is balanced in the sense that one cannot claim that Nestle disregards science-based arguments regarding the safety of food biotechnology, merely that she respects the legitimacy of value-based concerns about genetically modified foods. These include concerns with regard to the environment, health, and the rights of consumers to choose, which in turn impose demands regarding such issues as contamination, traceability, and labeling. Given the interests at stake in these issues, some readers may wish to interpret this stance as support for the anti-biotechnology lobby.

This book should be read and discussed in university departments that prepare students for work in food-related fields. It introduces a range of safety concerns that should become salient issues of discussion in the classroom. Its weaker points include a somewhat narrow focus upon national issues. There is a tendency to equate government agencies with existing U.S. institutions, while suggesting in passing that control systems in some European countries are more effective; equally, there is a tendency to equate science with the natural as opposed to the social sciences, neglecting much relevant social research with regard to globalization, distribution networks, and consumption, as well as such issues as trust and accountability. No book, however, can reasonably be expected to cover the entire field. This one raises many important issues and does it well.