Goldberger’s war:The life and work of a public health crusader 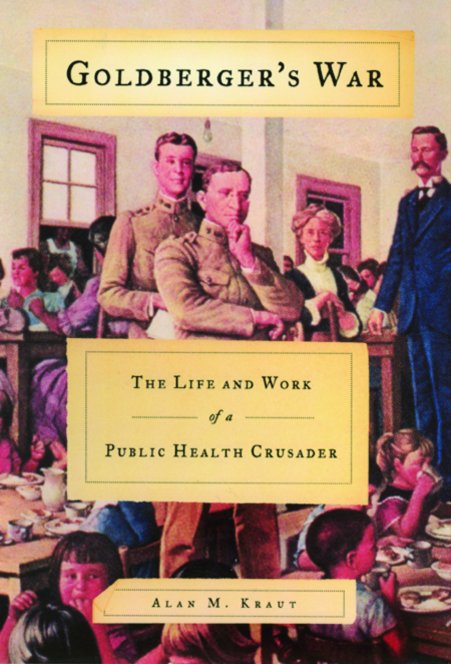 In the early twentieth century, over 100,000 poor Southerners, young and old, black and white, sharecroppers and mill hands, were afflicted annually with pellagra, a mysterious and frequently fatal disease characterized by skin lesions, delirium, and gastrointestinal disturbances (1). Each flood of the Mississippi River or collapse in the price of cotton pushed up the incidence. As fatalities rose, Joseph Goldberger, an up-and-coming bacteriologist in the US Public Health Service, assigned in 1914 to investigate the growing epidemic, concluded that the widely accepted infectious etiology was incorrect. Through careful field work in prisons and orphanages, Goldberger provided strong evidence for an underlying dietary deficiency (1–7). To convince the scientific public that pellagra was not transmissible, Goldberger, his coworkers, and his wife received injections of blood and excrement from affected prisoners. That none of them came down with pellagra is part of the saga, but that they escaped hepatitis or syphilis or some other common disease was indeed fortuitous.

Because pellagra’s victims were poor and socially unconnected, Goldberger’s original cure, a diet rich in lean meat, eggs, and milk, was considered unacceptable because it was too expensive. Returning to the federal government’s Hygienic Laboratory in Washington, Goldberger validated a model of the disease in dogs and showed that brewer’s yeast, at pennies a day, could do as well as the expensive diet. Political barriers, however, impeded the adoption of this inexpensive remedy. The result was that the total conquest of pellagra was delayed until 25 years after Goldberger’s discovery of a cure and ten years after his death.

Alan Kraut’s book is a skilled recounting of Goldberger’s life and complements nicely Elizabeth W. Etheridge’s 1972 masterpiece, The butterfly caste: the social history of pellagra (3). Kraut recounts how Goldberger’s achievements with pellagra garnered international recognition, including support for a Nobel Prize. Unfortunately, Goldberger died from cancer in January 1929, so his nomination was disqualified. Goldberger would have been a perfect companion to Christiaan Eijkman and Frederick G. Hopkins, who were selected for the Nobel Prize later that year for their work on vitamins. Kraut mourns the vacancy, the empty third slot in that 1929 Nobel Prize. A report of the archival records of the Nobel Committee’s deliberations would have been a worthwhile addition to this book. That third slot should be declared a perpetual memorial to Goldberger, who, in 15 years of total commitment, uncovered the cause of pellagra and introduced successful prevention and a cure.

Goldberger was a model research leader, revered by his colleagues who shared in his achievements. The research accomplishments of Goldberger and his colleagues, some of whom later became medical leaders, touch many still-relevant issues: the effects of poverty on medical care and medical research, the role of politics in altering the course of new therapies, and the ethical challenges of research. Also relevant are rules for researchers performing experiments on themselves and the dangers of investigating infectious diseases. Goldberger survived yellow fever and dengue and almost died of typhus, which reminds one of the present-day dangers facing health care workers in contact with patients with dangerous diseases such as ebola and SARS. Finally, Kraut uses the letters between Goldberger and his wife to highlight the ever-relevant struggles of professional versus family demands, the recurrent pain of months of separation, and the stresses of family finances on a dedicated but underpaid public servant.

I also enjoyed following the story of the nine-year-old Goldberger as he emigrated with his family from a village at the fringes of the Austro-Hungarian Empire to New York’s Lower East Side. There, good luck and hard work got him through City College of New York and the Bellevue Hospital Medical College. Kraut concludes that the economics and social isolation of solo medical practice led Goldberger to seek a US government post. Turned down by the Navy, he accepted a commission in the US Marine Hospital Service, which became the US Public Health Service in 1912. This book also recalls the multiple subtle and overt instances of anti-Semitism that Goldberger endured, including the extreme prejudice practiced by the US Navy in the recruitment of officers. We are all indebted to the Navy for rejecting Goldberger and thus assuring his scientific and medical legacy.

Instead of a history of a plague, Kraut presents a role model. Because of that, I recommend this book to every health care professional in his or her formative years. Curriculum committees often overvalue facts and neglect role models. It would be easy to remove 313 pages from today’s overstuffed medical curriculums and substitute this narrative of Goldberger’s life.