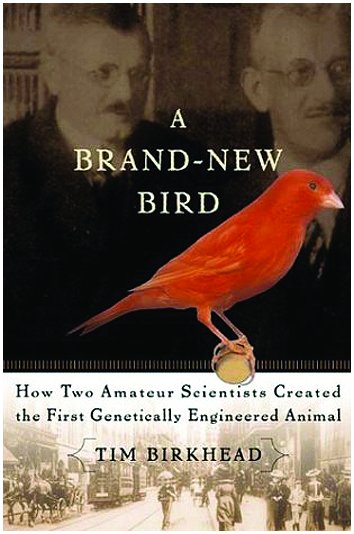 Tim Birkhead, an evolutionary biologist at the University of Sheffield, makes the case in A brand-new bird that the introduction into a species of a given trait from another species via cross-species hybridization and successive back-crossing represents genetic engineering at its most fundamental. On this basis, he makes a compelling case that the introduction of new color characteristics into the canary was the first de facto genetic engineering of an animal. Yet this is but a stepping-stone toward Birkhead’s larger vision, which is to present the development of the red factor canary both as a parable of the advance of modern genetics and a cautionary tale about its potential influence on human society.

Wild canaries are a dull green. The brilliant yellow of the common pet canary was derived through serial crosses that depleted melanin expression. After lines of yellow canaries had been successfully established, two German breeders of the early 20th century, Hans Duncker and Karl Reich, set out to develop a red canary. However, rather than breeding different canaries to select for this trait, Duncker and Reich tried to introduce the red factor from another species. For this purpose they chose the red siskin, a distantly related finch from Venezuela. By setting up red siskin × yellow canary crosses and then backcrossing the hybrids to yellow canaries, they hoped to rid the canary of all siskin traits, save for its red feathers.

Duncker and Reich were able to generate orange birds but never red ones. Their hypothesis was based on an assumption of absolute genetic determinism: that color was the product only of heritable factors and their interactions. Not until decades later did a pair of American breeders discover that the siskin required the ingestion of carotene (carotene gives carrots their hue); this was one of the first recognized examples of epigenetic modification of inherited traits. Since then, the epigenetic regulation of both gene expression and phenotype has become so evident that recognizing its importance is seen as little more than common sense; it is perhaps easy to forget that the interaction of genes and their environment was not long ago much less clear.

Birkhead’s tale of genetic engineering starts out as a treatise on the nature of canaries and their genes but swiftly evolves into a disturbing comment on human nature. The real protagonist of the book is Duncker, an educator and amateur geneticist, in an era when all geneticists were amateurs. Duncker’s insight was to see in the canary an animal model in which Mendelian laws of inheritance might be applied for the directed improvement of a species by the importing of single desirable traits borne by other species. In his desire to create red canaries, Duncker was the very picture of a scientist driven to understand biology’s deepest mysteries. But both as cause and effect of the political climate, Duncker began to see his work as leading to the betterment of the canary species — eugenics of the avian kind. Duncker soon translated his obsession with building a better canary and his belief in nature rather than nurture into support for a progressively insidious brand of human eugenics. An advocate of the 1930s-era mandates on eliminating mental defectives from German society, he then lent his name and experience to the development of German eugenics theory. He became a rabid anti-Semite, using his observations of the intergenerational instability of color phenotypes among canaries to rail against the possible pollution of German blood by Jews. Such was the perversion of the times that advances in basic genetics were co-opted by the state for propaganda, and scientists like Duncker allowed their work to be distorted and misrepresented for political ends.

As Birkhead points out, American geneticists of the time came to similarly flawed conclusions. They failed to see the dangerous, if unintended, implications of their beliefs, and in so doing permitted the advent, acceptance, and subsequent perversion of Germany’s eugenics movement. Birkhead makes a compelling if circumstantial case that among them was Charles Davenport, the first head of the Cold Spring Harbor Laboratory.

If some of the most disappointing aspects of human nature are exemplified in Birkhead’s tale, so are some of its finer features. American and British geneticists picked up the ball dropped by Duncker and ultimately succeeded in generating truly red canaries. They did so by seeing through the bias of absolute genetic determinism and recognizing the possibility of environmental modulation of gene expression. The ultimate success in the post-war US of Duncker and Reich’s pre-war German studies occurred only after they were divested of their political cloak. Birkhead’s story powerfully makes the point that society’s best interests, as embodied in the discovery process, are poorly served by the alignment of experimental efforts and political mandate. Lest we think this conclusion obvious or anachronistic, we need look no further than the US government’s close involvement in the direction of stem cell research to realize that the issues that Birkhead raises in this fine little book are as applicable to modern clinician-researchers as they were to a previous generation of bird fanciers.