A study in this issue of the JCI shows that in response to autoantigens consisting of peptides from normal proteins, patients with diabetes mount a T cell response characterized by production of IFN-γ . However, in response to these same antigens, T cells from normal control subjects produce IL-10. The antigen-specific response characterized by release of a regulatory cytokine suggests a mechanism for the control of autoimmunity that is initiated at the time of antigen presentation. 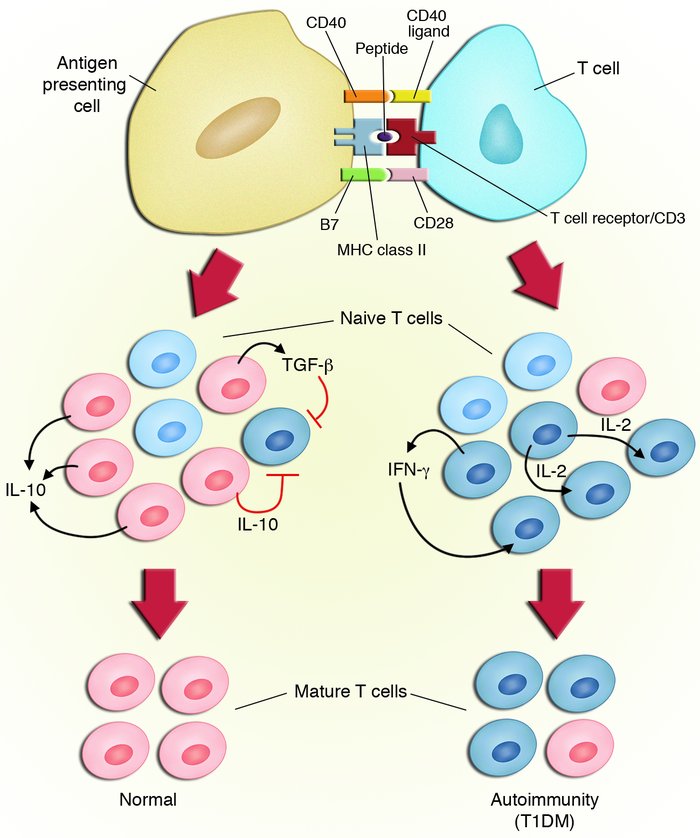 Immune regulation at the site of antigen presentation. The findings of Arif et al. () suggest that the same endogenous peptides activate T cells in patients with T1DM and normal nondiabetic individuals. However, the pathways of differentiation in patients in whom autoimmunity develops and normal individuals in whom autoimmunity is arrested are different. Following engagement of the TCR with antigen in the context of (in the case of CD4+ T cells) MHC class II and costimulatory molecules, naive T cells (light blue) from normal individuals differentiate into cells characterized by production of IL-10 (light red). Because of the immune regulatory properties of IL-10 as well as other cytokines that may be made with it (such as TGF-β), the cells that mediate an autoaggressive immune response (dark blue) are inhibited at the site of antigen presentation. However, the findings of Arif et al. suggest that in patients with autoimmune diabetes, there is instead induction of a predominant number of T cells that produce IFN-γ and IL-2 that characterize the autoaggressive immune response and a small number of IL-10–producing T cells.