How do mutations in lamins A and C cause disease?

How do mutations in lamins A and C cause disease?

Mutations in lamins A and C, nuclear intermediate-filament proteins in nearly all somatic cells, cause a variety of diseases that primarily affect striated muscle, adipocytes, or peripheral nerves or cause features of premature aging. Two new studies use lamin A/C–deficient mice, which develop striated muscle disease, as a model to investigate pathogenic mechanisms. These reports provide evidence for a stepwise process in which mechanically stressed cells first develop chromatin and nuclear envelope damage and then develop secondary alterations in the transcriptional activation of genes in adaptive and protective pathways. 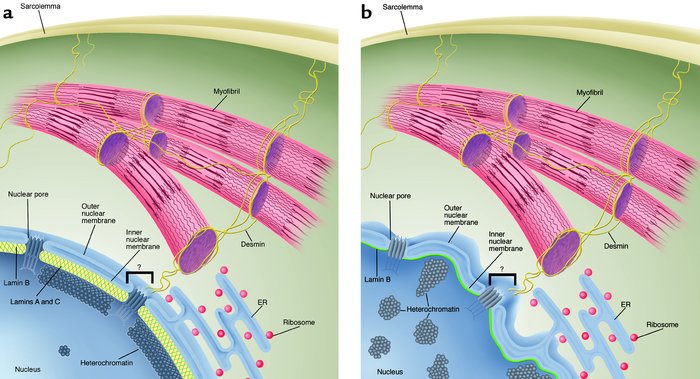 Schematic diagrams showing nuclear envelopes of a normal myocyte () and a myocyte from a mouse lacking lamins A and C (). The nuclear envelope contains the inner nuclear membrane, pore membranes, and the outer nuclear membrane, which is directly continuous with the endoplasmic reticulum (ER). It also contains the nuclear lamina and nuclear pore complexes. The nuclear lamina of a normal myocyte () is composed of A-type (lamins A and C) and B-type (lamin B) lamins, which form a meshwork of intermediate filaments (yellow, red, and green). At the periphery of the nucleus, heterochromatin is preferentially associated with the inner nuclear membrane and the lamina. Putative connections (? in figure) may exist between cytoplasmic desmin filaments and the external faces of the nuclear pore complexes. In a myocyte of a lamin A/C–deficient mouse (), the lamina is composed of only B-type lamins (green), and the nuclear envelopes are irregularly shaped with morphological abnormalities. Nikolova et al. () showed that heterochromatin is largely relocated from the nuclear envelope to the interior, which could cause alterations in gene expression. They also showed changes in desmin localization and hypothesized that this may result from alterations of its putative association (? in figure) with the nuclear envelope. Using fibroblasts from lamin A/C–deficient mice, Lammerding et al. () showed that nuclear deformities are increased by applied mechanical strain with resultant defective mechanotransduction and attenuated expression of mechanoresponsive genes. Adapted with permission from the Massachusetts Medical Society, Copyright 2000 (). All rights reserved.