Fat land: how Americans became the fattest people in the world 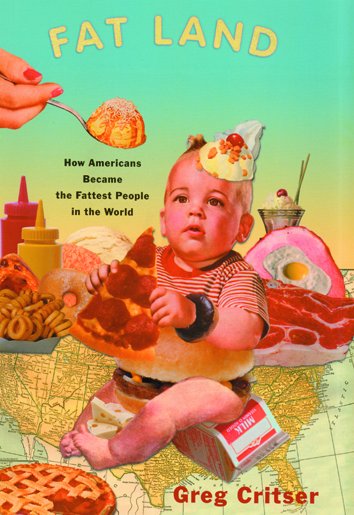 We are in the midst of a national obesity crisis, and Americans are getting heavier. Today, about 65% of adults and 15% of children and adolescents in the US are overweight or obese.

The physiological mechanism causing the increase in obesity is no mystery: Americans eat more calories than they burn, and the excess energy is stored as fat. Greg Critser’s book provides an insightful look at the reasons the energy balance equation has become so unbalanced. Critser delivers a comprehensive review of the governmental, agricultural, industrial, economic, and social factors that have contributed to today’s obesity epidemic. Despite its encyclopedic content, Fat land is a fascinating read because of his clear and entertaining writing style.

Critser’s chronology of obesity-inducing events begins with a review of the factors that led to the increased availability and consumption of high-calorie, large-sized food in this country. In 1971, Richard Nixon nominated Earl Butz as Secretary of Agriculture. Butz lowered the trade barriers that had limited the export of American products, which resulted in a marked increase in US corn and soybean production. At approximately the same time, Japanese food scientists produced a new sweetener, high-fructose corn syrup, which was less expensive and had a longer shelf life than sugar. New technology transformed palm oil into a viable and stable, but highly saturated, commercial fat. Food manufacturers began to replace sugar and traditional fats in their products with high-fructose corn syrup and processed palm oil, which led to an increase in inexpensive, energy-dense snack and convenience foods. In the 1970s and 1980s, fast-food restaurants discovered the profitability of “value meals” (e.g., packaging high-profit drinks and french fries with low-profit burgers) and of “supersizing” (e.g., tripling the serving size of McDonald’s french fries from 200 kcal in 1960 to 610 kcal today). Moreover, the percentage of meals eaten away from home doubled between the 1970s and the 1990s, and eating out usually meant eating more. Finally, school systems encouraged unhealthy eating practices among children by accepting soft drink and fast-food contracts because they provide large commissions for financially strapped schools.

The increase in energy intake has been paralleled by a decrease in physical activity. Critser identifies the many barriers to activity in modern society. Being active is no longer an obligatory part of daily function but rather a conscious choice. In the 1980s, television viewing became the predominant form of leisure activity. Computers and computer games, sedentary jobs, long commutes, sprawling suburbs with no sidewalks, and unsafe neighborhoods limit our desire and ability to move. School budget cuts have resulted in a reduction in sports teams and physical education classes; by the end of the 1980s, Illinois was the only state that required daily physical education.

However, Fat land fails to note that the increase in body weight in the US is not a recent phenomenon. The average body mass index (BMI) value has been increasing for more than 150 years. A large part of the “recent” obesity epidemic is due to a curve-shifting phenomenon. Now that the right tail of the bell-shaped curve for BMI in the US population has crossed the threshold for obesity (BMI of 30 kg/m2), small increases in average BMI and rightward shifts of the curve mean a sharp increase in the number of people considered obese. This does not diminish the importance of obesity as a public health issue, but it does suggest that the current problem is largely regulated by environmental factors that affect the population as a whole.

Although Critser carefully outlines the causes and consequences of obesity, his book ends with a naive discussion of what should be done. He cites successful outcomes from anecdotes and selected research studies, but does not provide an evaluation of the entire literature, which portrays a less optimistic picture. He devotes a lot of space to arguments for eliminating soft drink contracts in schools and increasing physical education but fails to note that many obese adults went to school in the 1960s and 1970s, when physical education was often mandatory and there were fewer soda vending machines.

After identifying the environmental factors responsible for obesity and potential environmental solutions, Critser abruptly reverses course in the concluding paragraphs of his book, implying that obese persons are “gluttonous” and “slothful” and that more “individual will power” is needed. This surprise ending does not fit with the well-developed theme of the rest of the text. Although each of us must take responsibility for our health, it is difficult for many Americans to achieve successful weight management because environmental influences are so strong.

Fat land is an absorbing read that helps explain the complex factors that have led to the recent increase in obesity prevalence. In addition, it is an articulate wake-up call that makes the case for aggressive action now. Additional research is needed to identify the optimal approaches for effectively inducing lifestyle changes in people of different age groups, racial and ethnic populations, and socioeconomic backgrounds.