When cells get stressed: an integrative view of cellular senescence

When cells get stressed: an integrative view of cellular senescence

Cells entering a state of senescence undergo a permanent cell cycle arrest, accompanied by a set of functional and morphological changes. Senescence of cells occurs following an extended period of proliferation in culture or in response to various physiologic stresses, yet little is known about the role this phenomenon plays in vivo. The study of senescence has focused largely on its hypothesized role as a barrier to extended cell division, governed by a division-counting mechanism in the form of telomere length. Here, we discuss the biological functions of cellular senescence and suggest that it should be viewed in terms of its role as a general cellular stress response program, rather than strictly as a barrier to unlimited cycles of cell growth and division. We also discuss the relative roles played by telomere shortening and telomere uncapping in the induction of senescence. 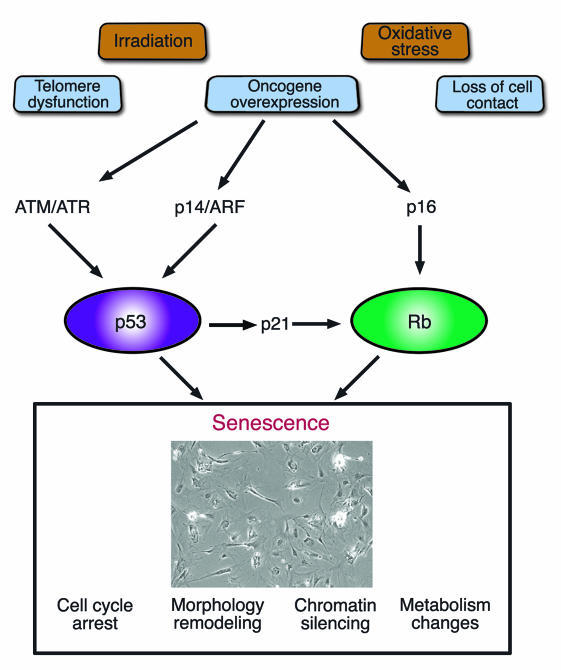 Senescence as a general stress-response program. A variety of physiologic stresses, intrinsic and extrinsic, lead to the onset of senescence. These stresses stimulate various cellular signaling pathways, which are funneled down to activate either the p53 protein, the Rb protein, or both. p53 can be activated by the DNA damage signaling pathways, the ATM and ATR proteins, or by the p14/ARF protein, which responds to oncogene overexpression and other stresses. p21, a target of p53, can cause the activation of Rb. Most cellular stresses will activate the p16/INK4a gene, also leading to Rb activation. Different stress signals will have different relative effects on the p53 and Rb arms, and their combined level of activation dictates the onset of senescence. Once this program is activated, a series of changes in cell function and morphology take place. ATM, ataxia telangiectasia mutated; ATR, ATM-related; p14/ARF, alternative reading frame product of gene locus.