Pseudomonas aeruginosa has two complete quorum-sensing systems. Both of these systems have been shown to be important for Pseudomonas virulence in multiple models of infection. Thus, these systems provide unique targets for novel antimicrobial drugs. 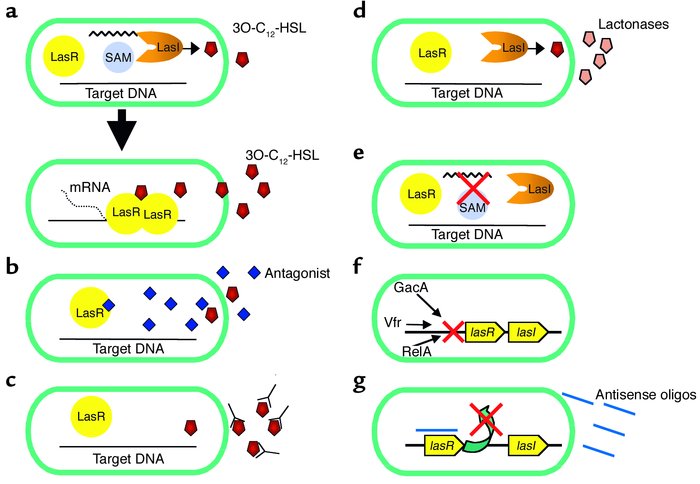 Potential QS targets for the inhibition of virulence. For simplicity, only the QS system is shown; however, similar mechanisms could be used to inhibit the system as well. () LasI synthase utilizes -adenosyl methionine (SAM) and acyl-ACP to form 3O-C12-HSL. As the density of the bacteria, and thus of 3O-C12-HSL, increases, the 3O-C12-HSL molecule binds to the LasR regulator, resulting in dimerization, DNA binding, and transcription of multiple genes. () Antagonistic analogues of cognate AHLs compete for binding to LasR but do not result in activation of the protein. () Specific antibodies bind to AHLs as they exit the bacteria, inhibiting their re-entry and thus inhibiting activation of LasR as well as their interaction with host cells. () Lactonases degrade AHLs as they leave the bacteria, thus inhibiting their activation of LasR and host cells. () Targeting the expression of LasI substrates would prevent the production of 3O-C12-HSL, and thus QS activation. () Multiple factors have been shown to regulate and . Drugs that inhibit these factors would result in altered QS activation. () Specific antisense oligonucleotides (oligos) pair with or RNA and inhibit gene translation and thus protein production.