Decreased elastin in vessel walls puts the pressure on

Decreased elastin in vessel walls puts the pressure on

Mice haploinsufficient for elastin develop structural changes in vessel walls similar to those seen in patients with mutations in the elastin gene. A new study demonstrates that due to mechanical changes in the vessel wall, these animals exhibit increased mean arterial pressures. The results evoke the possibility that alterations in elastin may contribute to the development of essential hypertension in patients. 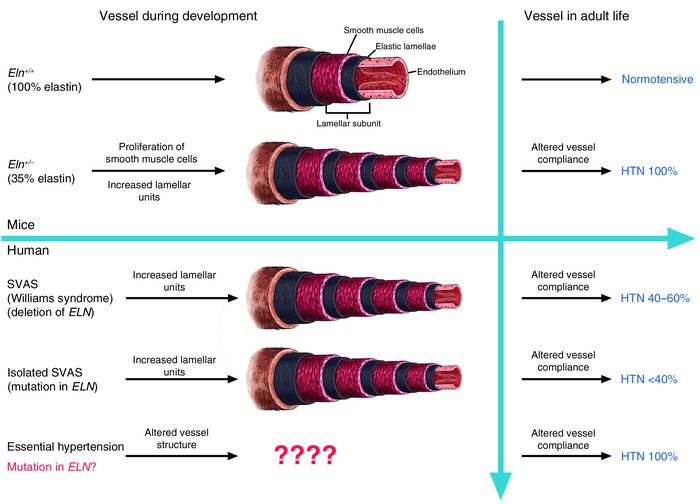 Haploinsufficiency of elastin in mice leads to developmental changes in the vessel wall, resulting in an increase in lamellar units. During the adult life of the animal, these structural changes translate into altered vessel compliance and a significant increase in the mean arterial pressure. These changes are similar to what is observed in two diseases identified as having mutations in the elastin gene; however, the incidence of hypertension (HTN) is lower in the human diseases. These intriguing findings raise the possibility that patients with essential hypertension, who exhibit decreased compliance of their arterial vessels, may have mutations in their elastin gene. Such mutations would lead to structural changes in the vessel during development that predisposes the patients to the development of hypertension later in life.