Until recently, bacteria were considered to live rather asocial, reclusive lives. New research shows that, in fact, bacteria have elaborate chemical signaling systems that enable them to communicate within and between species. One signal, termed AI-2, appears to be universal and facilitates interspecies communication. Many processes, including virulence factor production, biofilm formation, and motility, are controlled by AI-2. Strategies that interfere with communication in bacteria are being explored in the biotechnology industry with the aim of developing novel antimicrobials. AI-2 is a particularly attractive candidate for such studies because of its widespread use in the microbial kingdom. 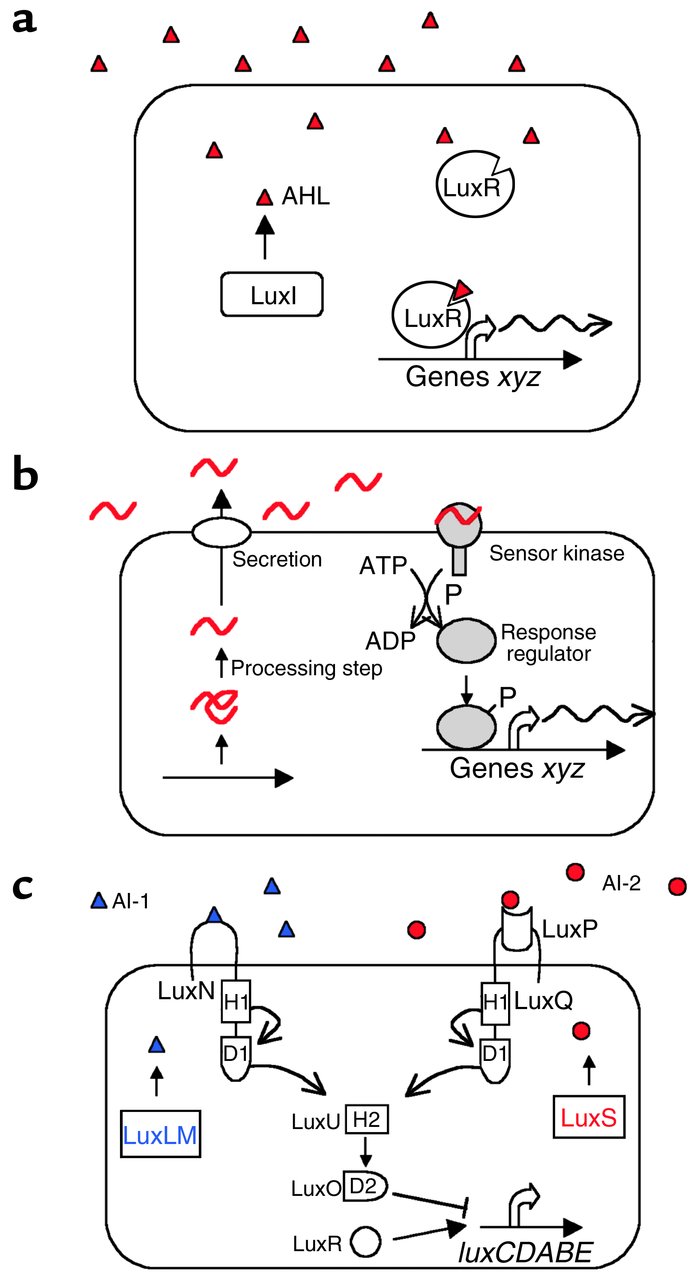 Three canonical quorum-sensing circuits in bacteria. () In Gram-negative bacteria, AHLs (red triangles) are produced by LuxI-like proteins and are detected by LuxR-type proteins. AHLs freely diffuse across the cell membrane and increase in concentration in the environment in proportion to cell growth. LuxR-type proteins, when bound to cognate autoinducers, bind specific promoter DNA elements and activate transcription of target genes (). () Gram-positive bacteria synthesize oligopeptides (red wavy lines) that are typically modified at specific amino acids and are actively secreted. Detection occurs via a two-component signal transduction circuit, leading to the phosphorylation of a response regulator protein, which can bind promoter DNA and regulate transcription of target genes (). () Quorum sensing in . Two parallel two-component systems detect AI-1 (blue triangles), an AHL synthesized by LuxLM, and AI-2 (red circles), a furanosyl borate diester, which is synthesized by LuxS. In the absence of autoinducer, the sensors act as kinases and autophosphorylate at a conserved histidine residue, H1, and the phosphate is transferred to a conserved aspartate residue, D1, in the response regulator domain. Phosphate is sequentially transferred to the conserved histidine (H2) of the phosphotransferase LuxU and then to the conserved aspartate (D2) of the response regulator LuxO. Phospho-LuxO indirectly represses transcription of , the enzymes encoding luciferase. Binding of the autoinducers by LuxN and LuxPQ leads to the dephosphorylation of LuxU and LuxO. Dephosphorylation of LuxO relieves repression of . A transcriptional activator called LuxR (not similar to LuxR in ) is required for expression of .