What brings pericytes to tumor vessels?

What brings pericytes to tumor vessels?

Paracrine signaling via platelet-derived growth factor B (PDGFB), expressed by endothelial cells, and its receptor PDGFR-β, expressed by pericytes, plays a central role in blood vessel maturation. A new study reveals that it is not just the presence of PDGFB, but how it is presented to pericytes, that determines the quality of the endothelium-pericyte interaction. 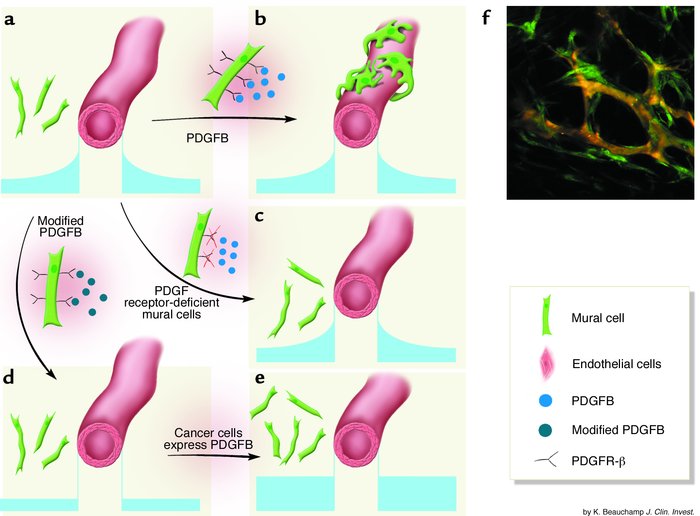 MC recruitment to tumor vessels depends on a putative gradient of PDGFB. () PDGFB, secreted by an EC tube, has higher concentration near the tube, as shown in the small graphs. () Normally, MCs, which express PDGFR-β, sense the PDGFB concentration gradient and move in to closely contact the ECs. (The basement membrane is not shown.) () If MCs do not express PDGFR-β, then they are not recruited. () Modifying PDGFB to remove its matrix retention eliminates the PDGFB concentration gradient and results in poor EC-MC contact. () If tumor cells express PDGFB, the PDGFB concentration in the tumor overwhelms the peri-EC gradient and EC-MC contact remains poor. () Perivascular cells expressing GFP under the control of the VEGF promoter surround vessels in the tumor interior. The image was obtained using a two-photon microscope. Orange, vessel lumens; green, MCs. Panel is reproduced with permission from ().