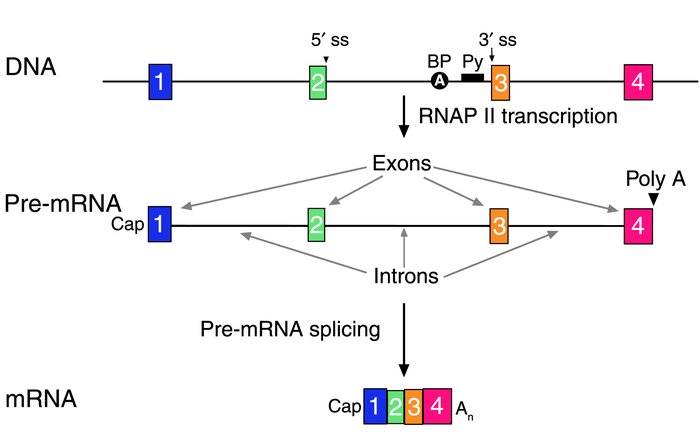 The structure of human genes and primary transcripts. A schematic of a gene (DNA), its primary transcript (pre-mRNA), and the mature mRNA product. The gene in this schematic spans four exons (boxes 1 through 4) and three introns. Genomic landmarks are indicated for the middle intron: the 5′ splice site (5′ ss), the branchpoint (BP) adenosine, the polypyrimidine tract (Py), and the 3′ splice site (3′ ss). The structure of the pre-mRNA, which is synthesized by RNA polymerase II, is shown. The 5′ end of the pre-mRNA is determined by transcription initiation and modified by a cap structure (). The 3′ end is created and modified by cleavage and polyadenylation (poly A). Introns are removed in pre-mRNA splicing to yield an mRNA. On average, introns are longer than 3,000 nucleotides. The 5′ and 3′ terminal exons (1 and 4) average 300 nucleotides in length; internal exons (2 and 3) average 145 nucleotides in length (, ).