Hepatitis delta virus (HDV) is a cause of acute and chronic liver disease for which no effective therapy is currently available. Previous research has demonstrated that prenylation of the large HDV antigen is essential for viral assembly. A new report describes a novel small animal model for HDV replication and demonstrates that prenylation inhibitors are highly effective at clearing viremia and thus have potential relevance for the treatment of chronic delta hepatitis. 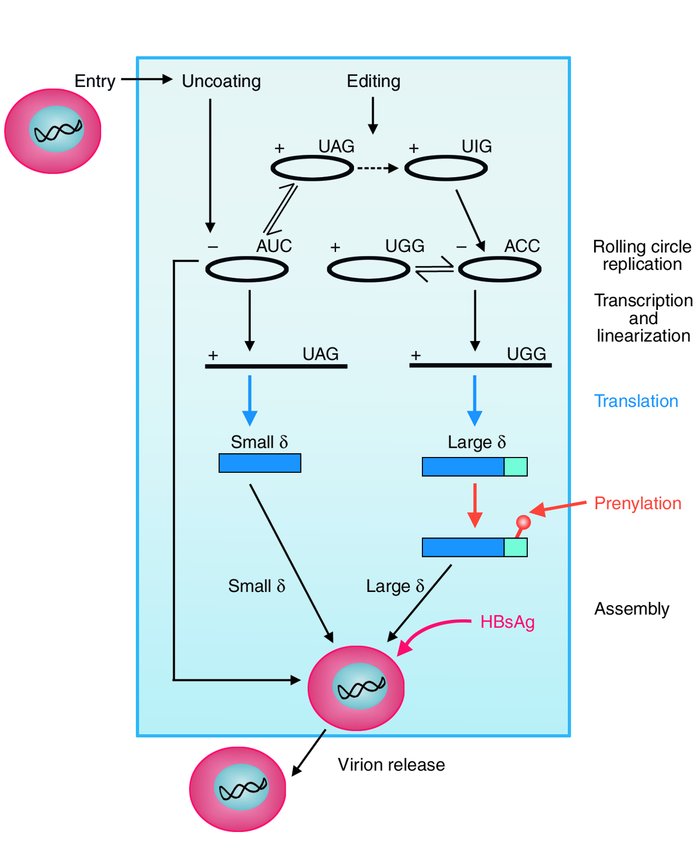 Replication of HDV. Viral particles consist of HDV RNA (black lines) and HDV antigen (blue) encapsidated by HBsAg (red). The HBsAg allows for binding and uptake of the virion into hepatocytes. Inside the cell, the RNA genome (negative polarity) is released and undergoes replication by the double-rolling circle pattern (double arrows). The antigenomic RNA (positive polarity) serves as the template for production of more genomic RNA but can also be edited by intracellular host dsRNA adenosine deaminase, changing A to I so that with production of genomic RNA, C rather than U will be transcribed (right side of the figure). The editing changes the UAG stop codon on the positive strand to a UGG, which is read as tryptophan, resulting in a protein with an additional 19 amino acids, the large delta antigen (large δ) that inhibits replication. Small delta antigen (small δ), the product of the unedited transcript (left side of the figure), binds to HDV RNA and promotes replication. Large delta antigen has a prenylation site that creates a hydrophobic molecule that binds both to HDV RNA and to HBsAg, leading to viral assembly and release. Thus, inhibition of prenylation will interfere with viral assembly and release but should affect replication minimally, if at all.