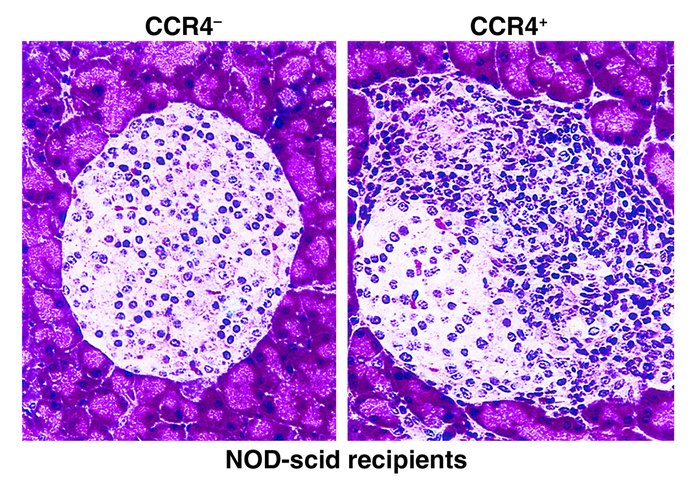 The influence of CCR4 in islet inflammation. Adoptive transfer studies performed by Kim et al. () suggest that CCR4-expressing T cells obtained from 16- to 18-week-old diabetic NOD mice confer a higher capacity for imparting pancreatic inflammation (i.e., insulitis) in NOD-scid recipients than do CCR4-negative cells. Indeed, the figure clearly demonstrates a marked degree of infiltration, and disruption of islet architecture was associated with transfer of CCR4-positive cells. It is key to note that this figure should be considered as representative since the quantitative data for insulitis reported in the study were not as striking as those qualitatively demonstrated in this figure in terms of the differences in inflammatory capacity afforded by the two populations of cells. However, this work does support a role of CCR4 in the homing of inflammatory cells to the pancreatic islet. This study provides a conceptual framework for the design of therapeutics aimed at interrupting the formation of insulitis and the eventual development of type 1 diabetes.