Chronic hepatitis B virus (HBV) infection remains a major global health problem. Hepatitis B surface antigen (HBsAg) loss has been accepted as the definition of a functional HBV cure. Recent studies found that while covalently closed circular DNA (cccDNA) is the predominant source of HBsAg in hepatitis B e antigen–positive (HBeAg-positive) patients, integrated HBV DNA (iDNA) is the main source in HBeAg-negative patients. Consequently, achieving a functional HBV cure will require not only silencing of cccDNA but also iDNA. Assays that distinguish the source of HBsAg are needed to evaluate emerging therapies. In this issue of the JCI, Grudda et al. developed a PCR-based assay that differentiated the source of HBsAg and explored the contributing sources of HBsAg in patients on nucleos(t)ide analog antivirals. These findings provide a tool for understanding the contribution of iDNA in HBV infection and may guide therapies toward a functional HBV cure.

Illustration of the HBV life cycle and genomic organization. 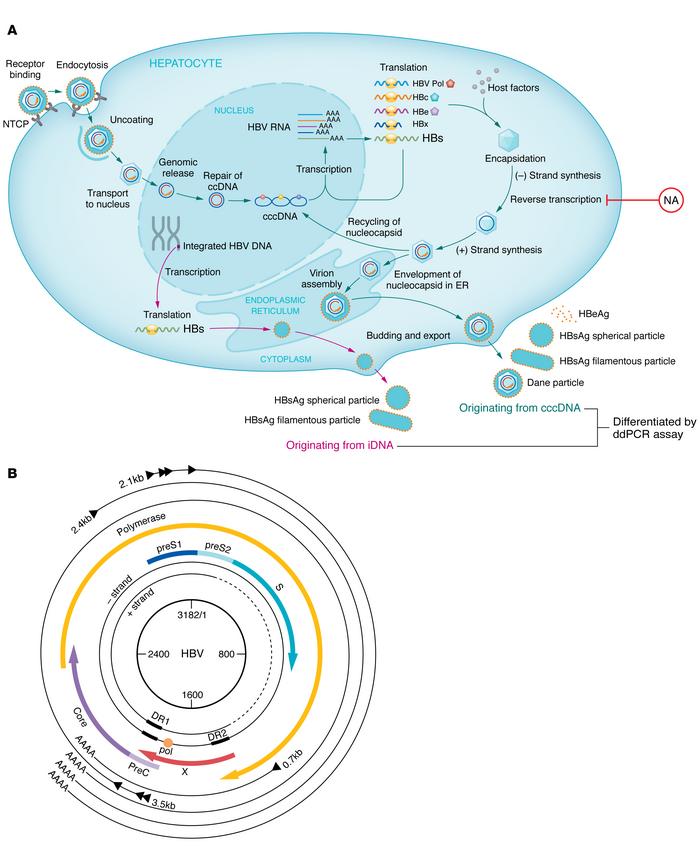 () HBV enters the hepatocyte via NTCP, a bile acid receptor. Following entry and uncoating, the nucleocapsid containing a partially double-stranded rcDNA translocates to the hepatocyte nucleus where host cellular enzymes convert the rcDNA into cccDNA. The cccDNA is a highly stable, supercoiled, episomal form of the viral DNA that serves as the template for transcription of all viral mRNAs, including the pgRNA. In the cytoplasm, the viral core protein self-assembles with the pgRNA and viral polymerase to form new nucleocapsids. Viral replication occurs within the nucleocapsid through reverse transcription of the pgRNA. The mature viral capsids containing rcDNA have two fates; they can be enveloped with the surface proteins in the endoplasmic reticulum and secreted from the infected cell as complete virions or they can be transported back to the nucleus to replenish the cccDNA pool. NAs inhibit genome replication by blocking reverse transcription of pgRNA, resulting in a rapid decrease in HBV DNA levels. Rarely, the minus-strand HBV DNA produces dslDNA instead of rcDNA. dslDNA can integrate into the host DNA as iDNA and can produce HBsAg. iDNA can continue to produce HBsAg even if cccDNA transcription is silenced and no longer produces HBsAg. Grudda et al. () developed a ddPCR assay that can differentiate HBsAg originating from cccDNA from that originating from iDNA. () The viral genome encodes four open reading frames that yield four mRNA transcripts with common 3′ ends. Notably, iDNAs lack the 3′ ends, which served as the basis for distinguishing the source of the HBsAg transcripts in the ddPCR assay. Four viral mRNAs — 3.5 kb pgRNA and 2.4 kb, 2.1 kb, and 0.7 kb mRNAs — yield precore (preC), core and polymerase, large, middle, and small HBsAg and X proteins, respectively. DR1, direct repeat 1; DR2, direct repeat 2.