Cellular sensors of feast and famine

Cellular sensors of feast and famine 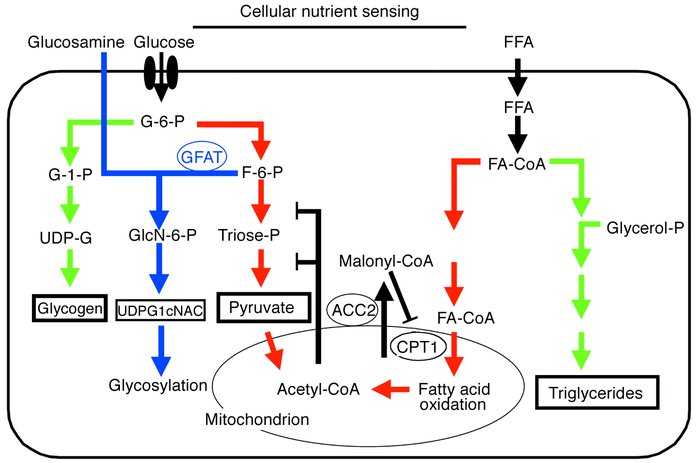 Two cellular fuel-sensing pathways. The hexosamine biosynthesis pathway and the malonyl Co-A system are proposed to modulate energy consumption by muscle and other tissues in response to changing levels of metabolic fuels. Following its entry into the cell via the glucose transport system, glucose is phosphorylated into glucose-6-phosphate (G-6-P), which is primarily utilized by the pathways of glycogen synthesis and glycolysis. Only 1–3% of the glucose entering the cells is diverted to glucosamine-6-phostate by the rate-limiting enzyme glutamine:fructose-6-phosphate amidotransferase (GFAT) (blue arrows). The end product of this pathway, uridinediphosphoglucose--acetylglucosamine (UDP-GlcNAc) serves as substrate for virtually all glycosylation pathways in the cells. Glucosamine enters the pathway directly after the rate-limiting step of GFAT, therefore mimicking a signal of excess glucose or nutrient. The second fuel-sensing pathway is that of malonyl-CoA. Increased cytosolic citrate from both the Krebs cycle and beta-oxidation contribute to increased Acetyl-CoA. Acetyl-CoA is the precursor of malonyl-CoA, a conversion that involves acetyl-CoA carboxylase 2 (ACC2). The primary role of malonyl-CoA is to regulate the rate of fat oxidation via its allosteric inhibition of carnitine palmitoyl transferase (CPT1), the enzyme responsible for converting long-chain fatty acyl-CoA into long-chain acyl-carnitine. Because the availability of Acetyl-CoA and the activity of ACC2 can each influence the concentration of malonyl-CoA, both can alter the balance between fat storage and fat oxidation.