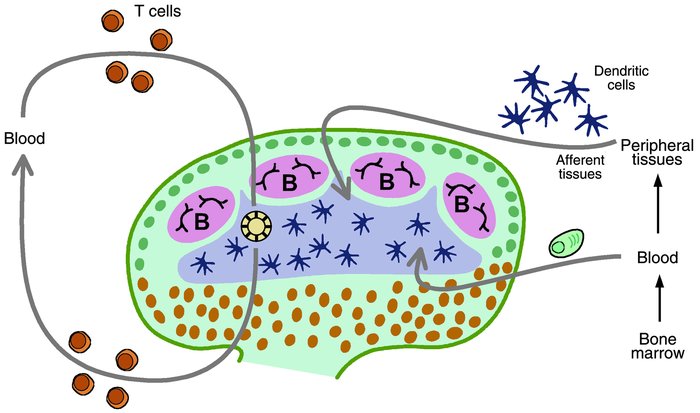 Lymphocyte and DC circulations. Naive lymphocytes circulate from blood via high endothelial venules into lymphoid tissues. B cells then move into follicles while T cells percolate through T cell areas, both eventually leaving the node via efferent lymphatics to return to the blood. Upon antigen recognition, some activated B and T cells, as well as DCs and follicular dendritic cells (a distinct cell type that, unlike DCs, retains native antigens as immune complexes), congregate in the follicles to generate the germinal center reaction for antibody formation. Other activated B and T cells return to inflammatory sites via the blood or become memory cells. Some of the latter are termed “effector memory” cells, because they can rapidly produce cytokines and are positioned in peripheral tissues. In parallel to the circulation of lymphocytes, DCs move from blood to tissues and then into afferent lymphatics, which bring DCs into the T cell areas where they eventually die. The plasmacytoid subset of DCs enters the T cell areas directly from blood; their subsequent fate is unclear.