The abscopal effect: a sense of DNA damage is in the air

The abscopal effect: a sense of DNA damage is in the air

Tumor metastasis is a singularly important determinant of survival in most cancers. Historically, radiation therapy (RT) directed at a primary tumor mass was associated infrequently with remission of metastasis outside the field of irradiation. This away-from-target or “abscopal effect” received fringe attention because of its rarity. With the advent of immunotherapy, there are now increasing reports of abscopal effects upon RT in combination with immune checkpoint inhibition. This sparked investigation into underlying mechanisms and clinical trials aimed at enhancement of this effect. While these studies clearly attribute the abscopal effect to an antitumor immune response, the initial molecular triggers for its onset and specificity remain enigmatic. Here, we propose that DNA damage–induced inflammation coupled with neoantigen generation is essential during this intriguing phenomenon of systemic tumor regression and discuss the implications of this model for treatment aimed at triggering the abscopal effect in metastatic cancer.

Overview of the antitumor immune response during the abscopal effect. 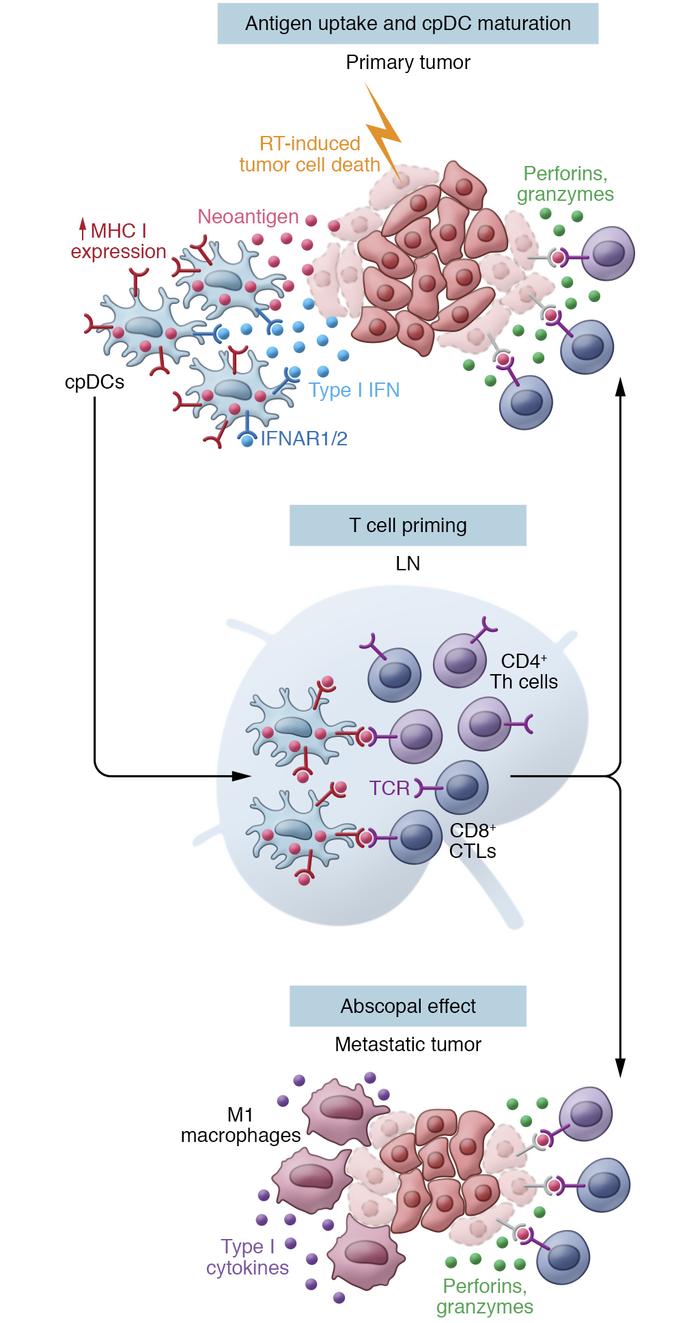 Antigen generation occurs upon tumor cell death due to RT and neoantigen (pink) uptake by cross-priming dendritic cells (cpDCs). Type I inflammation is triggered with associated cytokine secretion (type I interferon, blue), which upregulates MHC class I molecules on cpDCs. These cells migrate to lymph nodes from the site of the primary tumor and present tumor-associated antigens to naive T cells. This gives rise to a population of tumor-reactive CD4+ and CD8+ T cells, as depicted, and these cells are released systemically. At the primary tumor mass, tumor-reactive T cells are the main effectors carrying out the abscopal effect. This includes release of cytotoxic molecules (green) by CD8+ T cells upon recognition of tumor antigen (pink). This is aided by costimulatory release of cytokines such as IL-2 by CD4+ T cells upon antigen recognition, which promote T cell proliferation and effector function. M1 macrophages contribute to tumor cell killing by direct phagocytosis and secretion of type I inflammatory cytokines (purple). Importantly, given that immune cells are primed in lymph nodes and released systemically, these activities also take place at distal metastases where tumors exhibit the same antigen, which gives rise to the abscopal effect.