The involvement of nitric oxide (NO) in preventing bone loss has long been hypothesized, but despite decades of research the mechanisms remain obscure. In this issue of the JCI, Jin et al. explored NO deficiency using human cell and mouse models that lacked argininosuccinate lyase (ASL), the enzyme involved in synthesizing arginine and NO production. Osteoblasts that did not express ASL produced less NO and failed to differentiate. Notably, in the context of Asl deficiency, heterozygous deletion of caveolin 1, which normally inhibits NO synthesis, restored NO production, osteoblast differentiation, glycolysis, and bone mass. These experiments suggest that ASL regulates arginine synthesis in osteoblasts, which leads to enhanced NO production and increased glucose metabolism. After a period when research slowed, these studies, like the legendary phoenix, renew the exploration of NO in bone biology, and provide exciting translational potential.

Model for skeletal remodeling with NO positioned at the nexus. 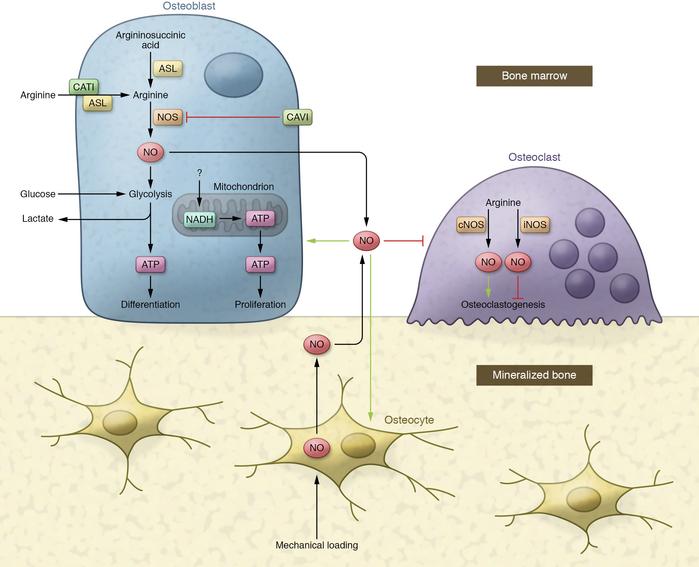 In bone marrow, NO is produced by osteoblasts to regulate (green/red arrow) osteoblasts, osteoclasts, and osteocytes. Mechanical loading of the skeleton could also lead to a brisk NO response in osteocytes to regulate surrounded cells. The ASL enzyme generates intracellular arginine and fumarate from argininosuccinate and provides arginine for NO production in osteoblasts, while CAV1 serves as an inhibitor of NOS to decrease the generation of NO. ASL together with cationic amino acid transporter 1 (CAT1) could also help transport arginine across the membrane to increase NO production. Intracellular NO in pre- and differentiated osteoblasts promotes aerobic glycolysis, which has been considered the principal source of energy in fully differentiated osteoblasts. Exogenous NO released by osteoblasts and osteocytes prevents osteoclast attachment and resorption. However, NO generated by osteoclasts has dual effects on osteoclasts, depending on constitutive or inducible NOS activity.