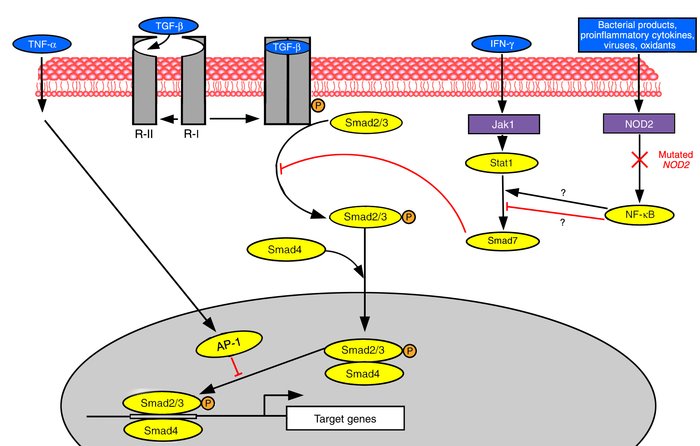 Schematic representation of the TGF-&bgr;/Smad pathway and its interrelationship with mediators of inflammatory signals. Ligation of TGF-&bgr; to the constitutively active receptor type II (R-II) causes recruitment and phosphorylation (P) of receptor type I (R-I) and formation of a receptor complex. The activated receptor I phosphorylates receptor-regulated Smad2 and -3, which then form a complex with the common mediator Smad4. The Smad2/3-Smad4 complex translocates into the nucleus together with DNA-binding cofactors and binds to enhancers specific for TGF-&bgr; target genes. The inhibitory Smad7 antagonizes TGF-&bgr; signaling by interfering with the binding of Smad2 and -3 with the activated receptor complex. IFN-&ggr; inhibits the TGF-&bgr;/Smad signaling pathway by upregulating the expression of Smad7. TNF-&agr; inhibits the pathway by inducing AP-1 components (c-Jun and JunB) that directly interfere with the interaction of the Smad2/3-Smad4 complex with DNA. Activation of NF-&kgr;B by a variety of inflammatory stimuli may also regulate the TGF-&bgr;/Smad pathway, but whether this involves activation or inhibition of Smad7 is still unclear. The NOD2 mutation, recently described in some CD patients, is depicted to suggest how it could hypothetically diminish the anti-inflammatory action of TFG-&bgr; by impairing NF-&kgr;B activity.