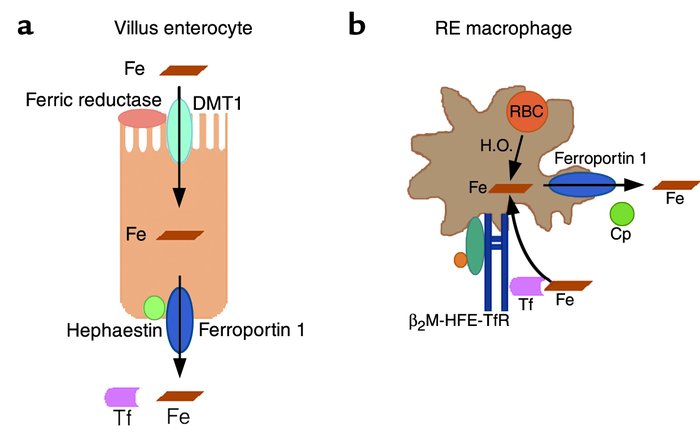 Ferroportin1 in absorption of dietary iron () and release of iron stores (). () Dietary nonheme iron at the luminal surface of the villus enterocyte is reduced by ferric reductase and taken up by DMT1. The iron may be retained, or transported across the basolateral surface by ferroportin1 (blue oval), oxidized by hephaestin, and bound to transferrin (Tf) for plasma transport. () Transferrin-bound iron (Tf-Fe) is taken up by the RE cell by a complex containing β2-microglobulin (β2M), the transferrin receptor (TfR), and the HFE protein (teal oval), which is defective in the classic, autosomal recessive form of hemochromatosis. Heme iron taken up by phagocytosis of senescent erythrocytes (RBC) is released by heme oxygenase (H.O.). The iron may be stored as ferritin, or exported via ferroportin1, after which it is oxidized by ceruloplasmin (Cp), and bound to transferrin for plasma transport. Hephaestin and ceruloplasmin, both indicated by green circles, are structurally similar and perform analogous functions, but their patterns of expression are distinct. Two recent papers, including one in this issue of the , have implicated ferroportin in an atypical, autosomal dominant form of hemochromatosis (, ).